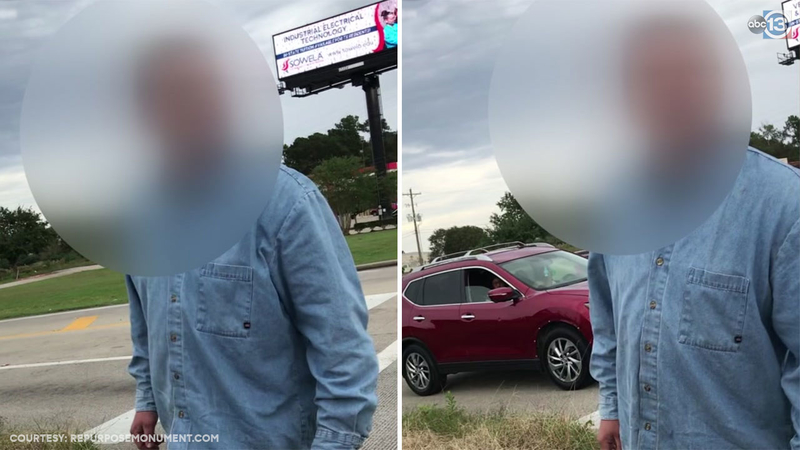 ORANGE, Texas (KTRK) -- A curse-filled rant directed at two protesters of a Confederate monument under construction in Orange, Texas, has quickly drawn thousands of views on YouTube since the confrontation happened over the weekend.

Jeremy Parzen says he and his wife Tracie were confronted by a stranger on Saturday at a street corner near the location of a Confederate memorial.

According to Parzen, the stranger had passed by the two, before parking his pickup yards away and approaching them with his tirade.

"Why don't y'all get out of here?" the man asks in the video. "What gives y'all the right to be (expletive) protesting America?"

The stranger then asks if they have a permit to protest, to which they explain they don't need one based on free speech protections.

"Why are you so angry, sir?" Tracie asks the man in the two-minute confrontation.

In the video, the man says the monument represents "America's heritage" and that the protesters destroy the landmarks only for their own beliefs.

"You don't deserve to be in this (expletive) country. You don't like it? Take you're (expletive) on," he tells the couple.

According to a blog post, they also have no issue with the stranger's history or heritage arguments.

"But this isn't about history or heritage. It's about displaying socially unacceptable iconography so publicly," Jeremy asserts.

The confrontation also comes as a rotating digital billboard began displaying near the monument site that reads, "The Confederate Memorial of the Wind doesn't reflect Orange, Texas community values. Please ask the Sons of Confederate Veterans to repurpose this site."

The man in the video remains unidentified.

Who is the man who allegedly tried to bomb a Hermann Park Confederate statue?
EMBED More News Videos