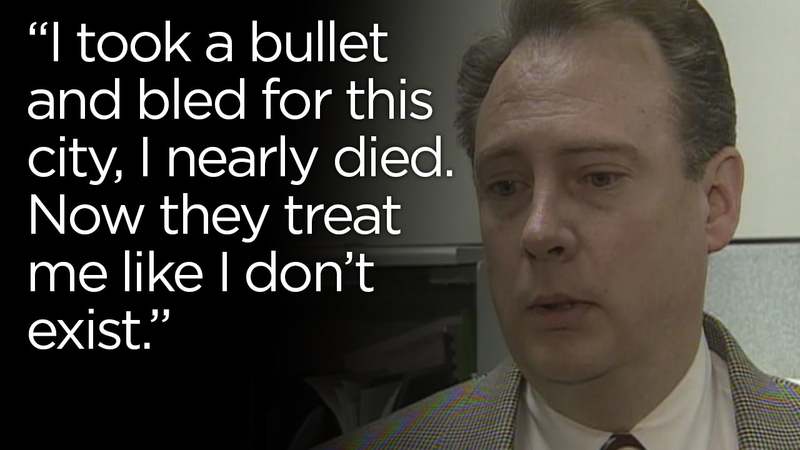 Shot in the line of duty, officer struggles to get benefits

What's shocking today, Bozeman says, is that after putting his life on the line, the city now doesn't want to pay for medical bills he and his doctor say are directly related to the shooting.

Bozeman was a police officer for 30 years.

"It's one of those careers I always wanted growing up," Bozeman said. "I loved it."

Bozeman was assigned a case one day that would alter his life forever.

He remembers the day well.

"My plan was to go to work for half a shift, then take half a shift off to take my wife to a Valentine's Day dinner."

The minute he walked into work, he was handed a missing woman case.

He quickly deciphered that the woman was in an "on again, off again" relationship with a man in west Houston. Bozeman and two others took off toward the house.

Neighbors said they heard 14-15 gunshots days earlier. No one reported it.

Bozeman knew there might be small children inside. So he got permission to go inside to check it out.

When he tried to go in through a window, "almost immediately" he was met with gunfire.

"I remember getting up and reaching to my left side and verifying by looking at my hand that I was bleeding," Bozeman said. "I had been hit."

"I recall feeling the bullet tumble... I could feel it tumbling over and over as it passed through me."

Bozeman's police instincts were still buzzing in his head. Despite his wound, he put his head back inside the house to look for the suspect.

He used a hypnosis technique to keep himself calm, carefully, precisely and importantly keeping his blood pressure low.

"He was well hidden upstairs."

Gunfire was still hailing down from the house.

Bozeman was able to get clear of the house, but the damage inside was serious. The bullet went all the way through him, hitting most of his internal organs. He was bleeding profusely.

He was able to get a phone. He called his daughter.

"I wanted to talk to her in case it was going to be the last time," he said.

His injuries grave, he was finally taken to a Life Flight helicopter.

In a moment of levity, Bozeman told paramedics who were ripping his clothes off to access the wound to cut everything but his brand new boots.

News footage of paramedics wheeling Bozeman into the hospital shows him on a gurney covered in blankets, wearing those brand new boots.

Bozeman's life became the hospital. He had surgery after surgery, 27 in total. In some cases, doctors had to perform a "wash out" procedure. Bozeman describes it as taking everything out --intestines, organs-- to wash them out because of massive infection.

"The infection almost killed me."

For the first six months, he couldn't eat anything, including ice chips. The damage to his insides was just too great to handle solid food.

Just over a year later, Bozeman walked back into HPD headquarters. The city medically retired him in 2005.

The city of Houston's worker comp system decided the issues with his gallbladder were not related to the gunshot. He paid the bills on his own with retiree health care, costing him thousands of extra dollars.

"My doctor says that it's all related, without a doubt," Bozeman said.

It's true. We saw the report from his doctor.

The city's doctor, Dr. Gabriel Habib never treated, saw or even talked to Bozeman. At first, he wrote the recent illness was "most likely" connected to the gun shot, but then "corrects" his opinion to say they aren't.

We asked Dr. George Miller to review both reports. Miller has done medical record review for insurance companies and for governments.

"But for being shot, he would not have had any of the complications that have occurreed subsequent," Miller said. "I can't believe the police officer is not owed worker's comp benefits for his abdominal issue from the scar tissue for the rest of his life."

Bozeman's denial is not a surprise to the police union where leaders told us they fight these issues frequently.

Denials across the city hover around 30 percent of all worker's comp claims. Bozeman, 15 years from being shot, is not willing to be one of them.

"I took a bullet and bled for this city, I nearly died," Bozeman said. "Now they treat me like I don't exist."

The city of Houston denied our request for an interview and multiple requests for a written response to Bozeman's case.

A spokesman told us, "The city Legal Department confirms that information about individual worker's comp cases, including how much money, if any, has already been provided to a claimant to cover medical bills, is confidential."

Bozeman has been denied once and is waiting on an answer for his appeal.

As Bozeman fights for himself, he's adamant he isn't the only employee caught in the system. Statistics from the City of Houston show 25% of Workers' Compensation cases are denied. Bozeman says the system is stacked against him in Texas making it difficult, Bozeman says, to get attorneys to sign on to cases like his. His quarrel is not just with the City of Houston system which denied his claim, but with the state which regulates all of Workers' Compensation.

Bozeman told us he is eager to advocate not just for himself but to convince lawmakers to change the system, "There are many injured employees who are now facing this very tedious, cumbersome and in my estimation one-sided Texas Workers' Comp system."

According to documents posted on the Texas Department of Insurance, the system was reformed in 2005, to better administer the program and "control medial costs."

Have a tip for Ted Oberg? A problem to solve? Get in touch with us on our tip page, or send a tip below. (On mobile? You can open our form by tapping here.)
Related topics:
houstonted oberg investigatespolice officer injuredhouston police departmentpolice officer shot
Copyright © 2022 KTRK-TV. All Rights Reserved.
TED OBERG INVESTIGATES
Harvey victim finally gets help 1,600 days after the storm
Report: 'Significant reform' needed to improve state foster system
Feds: Slow Harvey aid, left 'Houstonians without the help they needed'
More than 20K HISD students in classes without certified teacher
TOP STORIES
Daylight shows home destroyed after standoff with shooting suspect
What we know about man accused of shooting 3 HPD officers
5 people charged in connection with Pct. 5 corporal's murder
Driver dies after slamming into 18-wheeler's trailer on US-59
Woman shot in the shoulder during robbery set up in SW Houston
Officers escort body of corporal killed in ambush to funeral home
Clouds clearing today, sunny through the weekend with rain next week
Show More
ABC13 obtains HPD scanner traffic of chase that led to shootout
10 injured in PA bridge collapse; human chain formed to help
Remembering the crew of the Space Shuttle Challenger
Bayou Bistro and Bar owner killed in Texas City shooting
Holocaust survivor, great-grandson educate next generation on TikTok
More TOP STORIES News