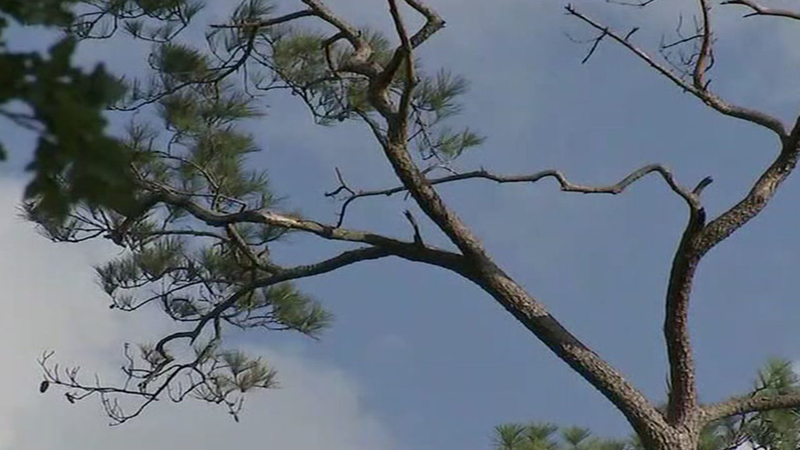 City of Houston cuts down trees not on city property

HOUSTON, Texas (KTRK) -- Homeowners in a northwest Houston neighborhood known for its trees are upset the City of Houston cut down nine trees without informing them.

"Went and ran a few errands. Came back and all the trees were gone," said resident Jamie Farquhar-Rizzo. "The name of the neighborhood is Shepherd Forest. What are we going to call it if you remove all the trees?"

Shepherd Forest is one of those neighborhoods with tall and lush trees. They are what homeowners love about where they live and that's why the tree removal is upsetting.

"I was crying when I came down the driveway. It was horrible," Sandra Reyna, who lived the closest to the trees, said.

The trees stood on the outside of the fence, but blocked the view of apartments across the street, buffered the sound of W. 34th and shaded the end of the street, homeowners said.

According to the Houston Parks and Recreation Department, a forester found the trees to be decayed and dangerous to pedestrians and motorists. They were in the city right-of-way and scheduled for removal months ago. Residents had no idea.

"I think that's the biggest problem. The city should have notified us," Farquhar-Rizzo said.

Houston City Council Member Brenda Stardig agrees. She sent a memo to the mayor's office voicing the concern about a lack of notification. The Parks Department maintains because the trees were along a major thoroughfare, there was no need.

"I think if we don't say something it will happen in other neighborhoods," Reyna said.

As for residents, they are asking the city to repair damage to the fence and nearby grass caused by the removal and to replace the old trees with new ones.

"We're thinking, maybe, like 20 tall Cypress trees," Farquhar-Rizzo added. "The damage has been done, but there needs to be some kind of replacement."