KTRK
HOUSTON, Texas (KTRK) -- The Christopher Columbus statue at a park near the Museum District has been vandalized for the second night in a row.

Vandals put a noose around the statue and broke off its hand Thursday night.

The night before, vandals tossed what appeared to be red paint on the 7-foot-tall statue, which is located at Houston's Bell Park at 4900 Montrose. The statue also had a cardboard sign left behind with the message, "Rip the head from your oppressor."

While it's not clear when exactly the statue was vandalized, watch the video above for more on the message left on the statue.

It's not clear when exactly the statue, which was commissioned by the Italian American Organizations of Greater Houston Inc., was vandalized on either night.

The vandalism came in the midst of Mayor Sylvester Turner's announcement that two Confederate statues in Houston will be moved to prevent the same fate of the Columbus statue and to provide context.

The Dowling and Spirit of Confederacy statues, which are currently both located in two city of Houston parks, will be removed by Friday, June 19, in commemoration of the Juneteenth holiday, which memorializes the day slaves in Texas learned the Emancipation Proclamation granted their freedom, the Mayor said in a statement.

The statues will be displayed at the Houston Museum of African American Culture in the Museum District. 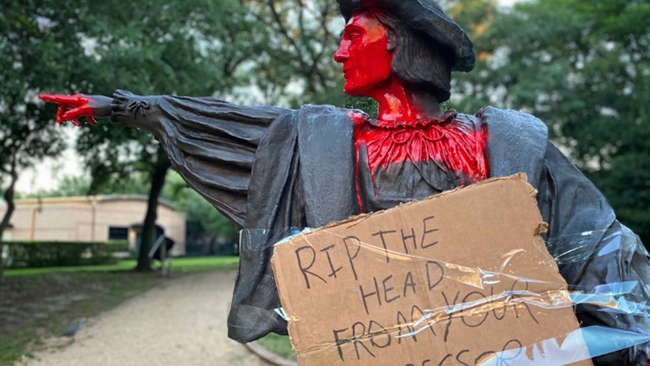