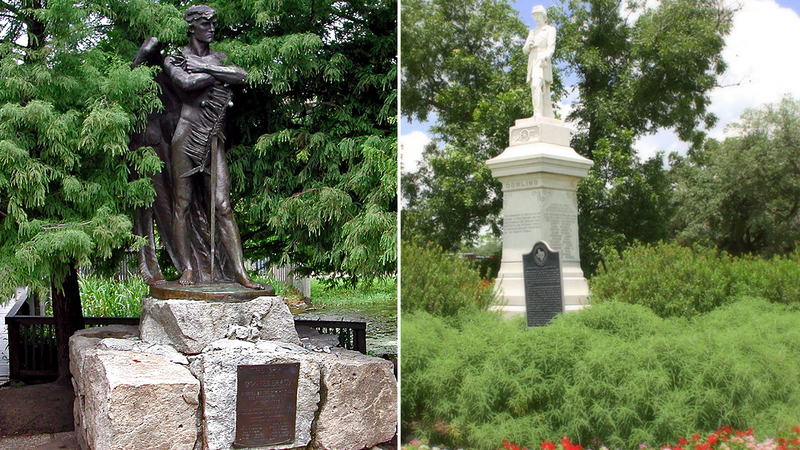 The Dowling and Spirit of Confederacy statues, which are currently both located in two city of Houston parks, will be removed by Friday, June 19, in commemoration of the Juneteenth holiday, which memorializes the day slaves in Texas learned the Emancipation Proclamation granted their freedom, the Mayor said in a statement.

The Houston Endowment provided a grant to transfer the Spirit of The Confederacy located in Sam Houston Park to be displayed at the Houston Museum of African American Culture in the Museum District.

"This is a place for us to have a difficult conversation," said John Guess, CEO Emeritus of the museum. "If we act like it didn't happen. If we push it aside. We are not reminded continually, as we will remind people with the Spirit of the Confederacy. That period happened and it will again, if we don't pay attention. The one thing we don't want is "lest we forget," instead of being "one nation, one story, a common future," Guess added, referring to a sign already up outside the museum showing an image of the statue.

The statue of Richard W. "Dick" Dowling in Hermann Park is expected to be moved to the Sabine Pass Battleground State Historic Site in Port Arthur.

"While we have been working on a plan for some time, I have decided to move forward now considering the events of the past several weeks," Mayor Turner said. "Our plan for relocating Confederate statues from public parks to locations more relevant to modern times preserves history and provides an opportunity for our city to heal."

The decision to move the statues comes after the Christopher Columbus statue at a park near the Museum District was vandalized.

RELATED: Christopher Columbus statue in Houston latest to be vandalized across US

Vandals tossed what appeared to be red paint on the 7-foot-tall statue, which is located at Houston's Bell Park at 4900 Montrose. The statue also bore a cardboard sign with the message, "Rip the head from your oppressor."

Even though Columbus is not tied to the Confederacy, critics have said he should be viewed not as a hero who "discovered" America, but as a foreign conqueror who enslaved natives.

A statue of Columbus was also toppled and burned in Richmond, Virginia, earlier this week. That figure also had a sign, this one reading, "Columbus represents genocide."
EMBED More News Videos