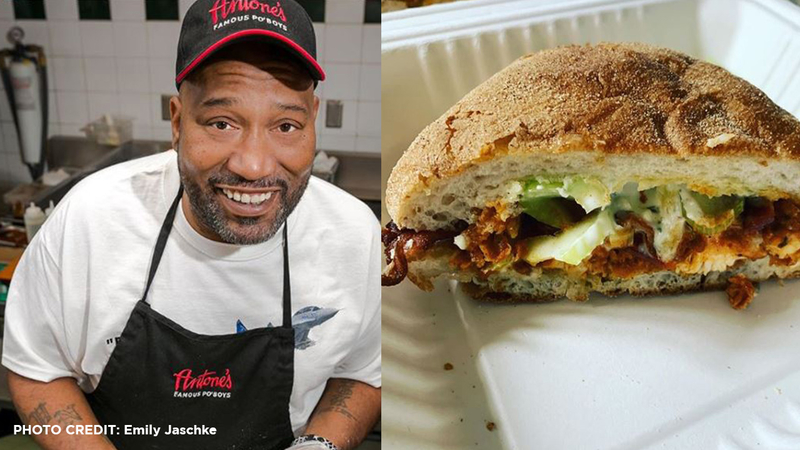 Bun B creates 'Hot Wang Sandwich' for good cause

HOUSTON, Texas (KTRK) -- At first glance, Chef Alex Padilla from Antone's Famous Po' Boys and Houston rapper Bun B seem to have known each other for a long time, when in fact, a charity cause recently made them quick friends.

As the chicken war between Popeye's and Chick-fil-A over who has the best sandwich has taken over social media, Bun B and Antone's have teamed up to create their own sandwich to sell.

"What can I say, it's just a win-win thing," said Padilla.

Padilla and Bun B came up with the "Hot Wang Sandwich," and all proceeds will go toward Second Servings of Houston, an organization that gives leftovers from restaurants to area shelters.

"Once I connected with Chef Alex, he brought in great ideas," said the rapper.

The buffalo-style Po' boy has been selling fast. For $8.95, you'll get a fried chicken breast with buffalo sauce, bacon, and blue cheese or ranch dressing on a ciabatta bun.

"It's been going well," said Bun B. "We've been getting a lot of demand for the sandwich, we're turning over a lot of sandwiches and, you know, raising money for a good cause."

Antone's is starting a charity program to help Second Servings called "H-town Originals" and Bun B is the first to be a part of it.

"It goes towards a good thing and I thought I could come up with a good concept for a sandwich and I think we did a good idea," he said.

They're serving up a sandwich to ultimately serve those in need in Houston. The sandwich will be featured on Antone's menu until the end of September.

"It's all for a good reason," said Padilla.