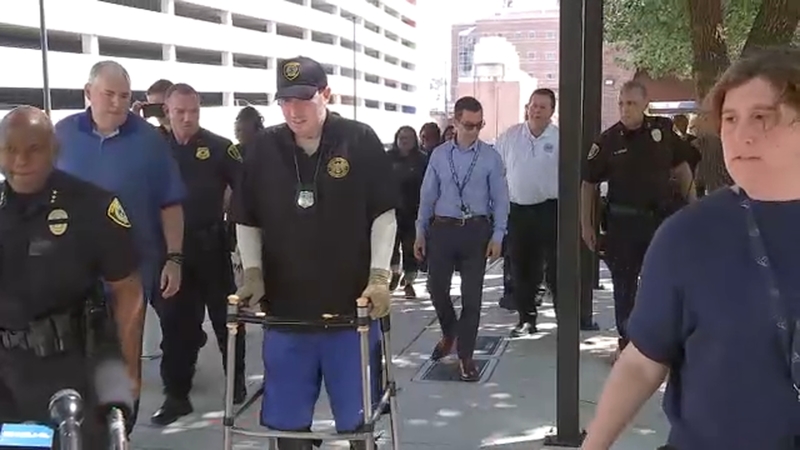 HPD officer severely burning in crash walks out of hospital

HOUSTON, Texas (KTRK) -- The Houston police officer burned in a crash with another driver on Christmas Eve was released from the hospital Thursday.

Officer John Daily suffered burns to over 90 percent of his body.

ABC13 was there as he walked out of the hospital in the Texas Medical Center for the first time. He told reporters he's received nationwide support.

"I've gotten letters from so many people, this department has been right behind me," Daily said.

His mission now is to focus on recovery and to fight drunk driving.

"This was a drunk driving incident," Daily said. "The good Lord brought me across people here at this hospital who have had their lives torn apart by drunk driving."

Daily said he met many victims, including some who suffered back and spinal cord injuries.

WATCH: Officer John Daily talks to reporters as he walks out of the hospital for the first time in months
EMBED More News Videos

HPD Officer John Daily said he no plans of leaving the police force despite the crash. "If they'll keep me, I'll stay!"

Daily and his partner Officer Alonzo Reid were injured when a Lincoln Navigator slammed into their Chevrolet Tahoe on Telephone Road and Peekskill Lane around midnight on Christmas Eve.

The officers had the vehicle's lights and sirens on.

As the driver of the Navigator was making a left into an apartment complex at 10201 Telephone Road, it drove into the Tahoe, forcing the officers' unit to flip several times and catch fire.

Daily and Reid were trapped inside.

Reid, who had burns on his legs and several cuts on his face, was released from the hospital in time to spend Christmas with his family.

However, Daily underwent several surgeries to remove the burned skin from his body and was on a feeding tube at one point.

His family has been posting updates on the Facebook page "I Fight With John."

Last month, Daily presented the Rookie of the Year award to Reid. In the video, Daily is in a wheelchair.

"It's nothing short of a miracle when you look at the damage that patrol car had, and just how bad the fire was," Houston Police Officers' Union President Joe Gamaldi said at the time. "Already one of those officers is going home, and I think it shows you the fighting spirit that we all have here at HPD, and I'm confident Officer Daily will be going home one day just the same."

Daily says he has no plans of leaving the force.

According to court documents, Leonel Moreno has been named as the suspect in the case and has been charged with failure to stop and render aid - serious bodily injury.

Court documents show Moreno was the driver of the Lincoln Navigator that crashed into the officers' Tahoe.

Moreno allegedly ran away from the scene.
A different man, Cesar Collazo, was initially accused in the crash, but his charges were dismissed after DNA evidence proved Collazo was in the passenger seat.

Moreno has not been arrested.