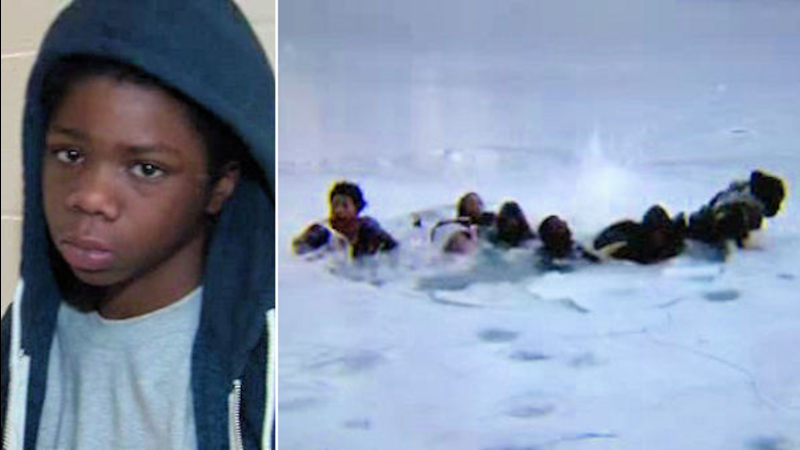 MANHATTAN, NY -- Some of the seven teenagers who had to be rescued after falling through the ice on the Central Park pond are speaking out Tuesday, describing their harrowing experiences.

Two good Samaritans jumped into the frigid water to pull the boys out, and 14-year-old Brandon Sargeant was among those hospitalized with hypothermia.

"It was cold, but my friend was about to drown," he said. "The ice was already cracking, so all of us tried to grab (him), because he was in the middle, and then he was panicking. And then when they got the ladder, he pulled the ladder and then everybody fell in."

Sargeant said he and eight other boys ages 13 to 17 were headed to the basketball courts around 6 p.m. when one friend, Kevin, spotted someone taking a picture on the ice and wanted a selfie. They assumed it was safe, but the ice on the pond near Central Park and Sixth Avenue quickly caved.

"Everybody was grabbing each other, and the guy was telling me to push people towards him," Sargeant said. "Kevin was panicking, grabbing people, and making them go under...I tried to swim to the top, but people was pushing me down."

The 17-year-old son of Carolyn Burgess was among those in the water.

"I saw them standing on the ice, taking a selfie," mom Carolyn Burgess said. "And the next minute, they were in the water, trying to get air. I kept seeing my son going under the water. They were pushing each other down. It was kind of hard."

Luckily, help was coming in the form of Bennett Jonas and Ethan Turnbull, who were nearby and ran over to help when they heard screaming. Burgess' son was rescued, but terrified.

Messiah Garcia, 13, watched his friends fall in and tried to help.

"I tried to grab one of my friends, and they pulled me in," he said. "One second can change your whole life. Think before you do."

Sargeant's mother, Kishawansa Sargeant, got a call from a hospital while she was at work. She said she was grateful for the heroic actions of strangers.

"Thank God for him," she said. "I appreciate it, whoever you are, sir, but thank you, thank you. Because he was shaking too, on the news. I saw him shaking. I'm like, wow, thank God, a Good Samaritan."

She also said that Sargeant was punished, and that he won't be venturing onto the ice again.

"You shouldn't be there anyway, you should be home in the house," she said. "If you were smart enough, you'd know the ice is thin. Why were you on top of the pond anyway?"

One victim, identified as Junious Hall, remains hospitalized. The other teens were treated and released. Burgess also expressed her gratitude.

"A selfie? On the ice?" she said. "Why would you think of a pond to go into to take a selfie, knowing that it's warm and the ice is melted?...I just want to thank the two Samaritans who went out there to grab my son. I want to say thank you so much. Thank you."