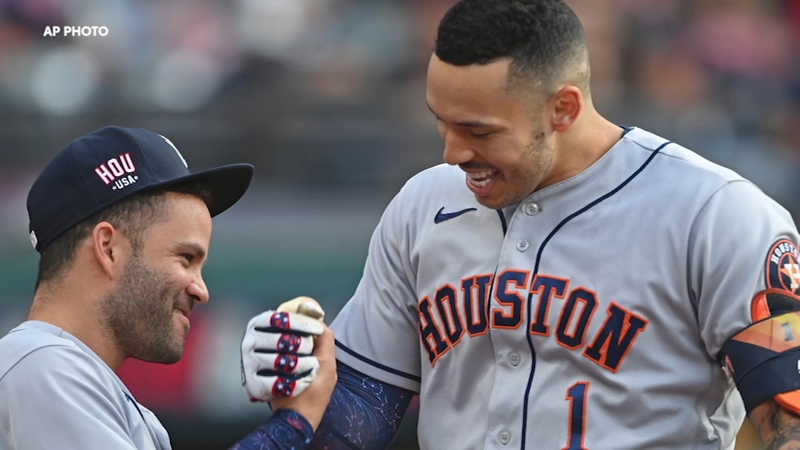 2 Astros All-Stars pull out of game for different reasons

Both players were named reserves for the game Tuesday night in Denver.

Altuve, a second baseman, on Thursday cited needing the time off to deal with unspecified "issues" with his left leg as his reason for pulling out of the game.

"I really think I need those four days to get everything on my leg right and be really healthy for the second half because I feel like the team needs me 100%," Altuve said.

Altuve, who was named to the team for the seventh time, has not missed any time with the problem this season and would not provide any details on what exactly is wrong with his leg.

Correa, a shortstop who received his second All-Star nod this season, chose to skip the game to spend time with his wife Daniella, who is pregnant with the couple's first child.

"Baseball is really important to me, but family will always come first, so we decided I'm going to stay here with her, spend this time," Correa said. "Obviously, we don't get a lot of time together with baseball season, so I'm pretty excited about that."

Both players said they've loved playing in the game in the past and that the decision to opt out this season was a difficult one.

"People voted for me to be in it," Correa said. "People want to see me play in it. But we've been trying now for a long time to have our first child. And now that it's finally there in her belly, I want to be able to spend those days with her."

Altuve added that he wished he could play but decided it just didn't make sense to push himself as he deals with his leg problem.

"This is an honor to me," he said. "I'm really thankful. But I'm putting my team first and I really think I'm making the best decision."

The strong play of Altuve and Correa this year has helped the Astros to a 54-33 record entering Thursday's games to lead the American League.