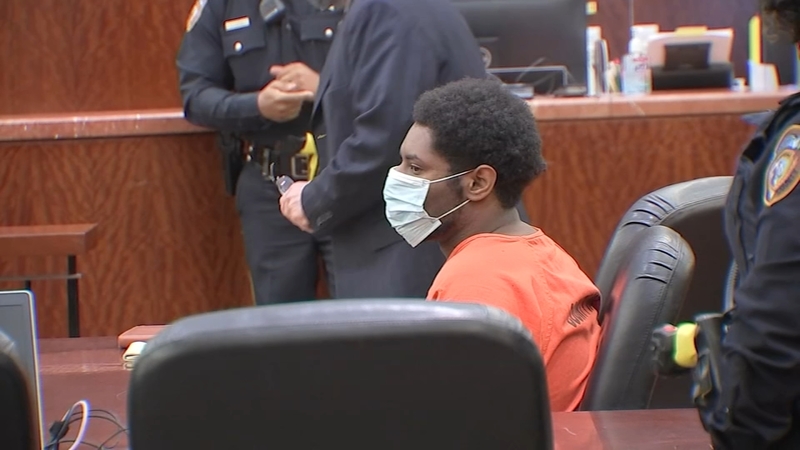 HOUSTON, Texas (KTRK) -- An ex-girlfriend of the man accused of causing 8-year-old Keyontae Holzendorf's death spoke out to ABC13. She said she found the courage to end what she called an abusive relationship.

The woman pressed charges against Dominique Lewis in September 2018. She asked not to be identified due to the sensitive and violent nature of the incident. Police arrested him for assault on a family member. He pleaded guilty and served 54 days in the Harris County Jail.

She described Lewis as the aspiring, talented rapper known as "Unikue," who first came across as a kind man. She met him on the bus. She said he described having a rough upbringing.

"He was very charming. He was into music. I'm into music. We ended up having a connection over music," said the woman. "He came and spent some time at my house. I really liked him. He needed a place to stay. I said, 'Come stay with me.' I got sucked into the relationship."

"Gradually over time, he becomes more demanding and more controlling," said the woman. "He wanted me to provide everything, supply everything. A lot of my money went to him."

She said eventually the emotional abuse turned physical. She told him the relationship was over. The ex-girlfriend said he tried to assault her when she came home from work one day.

"I had just gotten home from work. I was trying to take a shower. He was all like, 'Baby, baby. Let's kiss,' and whatever. 'I already told you I'm not your girlfriend anymore. You're just still living here. I'm trying to take a shower.' Gradually, he took me to the bed and tried to have sex with me. I told him I'm not interested," said the woman. "He's like, 'I'll rip your shirt off.' My dad was in the next room and heard the scuffle. He called 911."

She said Lewis threatened her loved ones.

SEE ALSO: Houston police had contact with 8-year-old boy 3 weeks before his death

"If I had continued the relationship, it could have gotten a lot worse. The thing about Dominique is when he gets angry, he gets extremely angry," said the woman. "He doesn't control himself well. He will destroy things. He will hit things. Luckily, I got out of it before it got too bad."

The woman said she feels for the boy's mother, Kayla Holzendorf. She said she wanted to hug her and said it's likely Kayla got caught up in a bad relationship.

"Honestly, Houston and the police department, you guys need to do something better about this," said the woman. "There has to be a larger community support system for people in these situations."

In the meantime, Keyontae's family has set up a GoFundMe account to raise money for a proper burial in their home state of Georgia.

Court records revealed the new details just hours after the child's maternal grandparents told ABC13 his mom concealed him from them before his death.