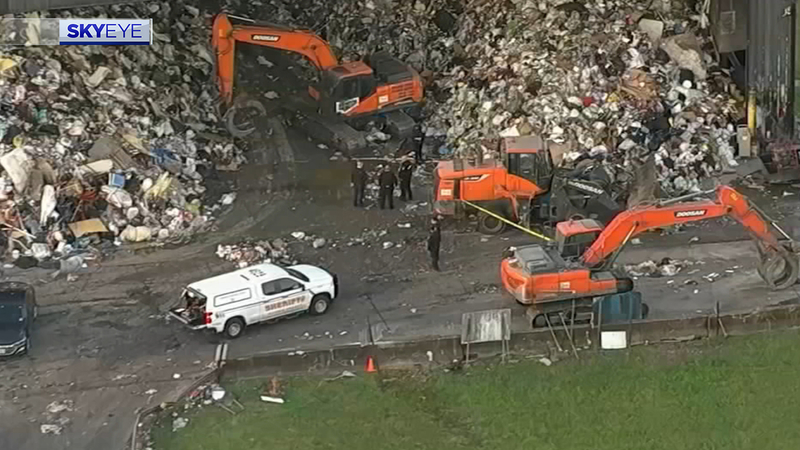 Harris County Sheriff Ed Gonzalez said the body, believed to be that of a white man in his early 60s, was found at a waste disposal facility located at 18784 E. Hardy Road near Richey around 3:30 a.m.

Workers were using heavy equipment to move trash in the sorting warehouse when they discovered the body, Gonzalez said.

"For them to come across it was something that was pretty startling for them," Gonzalez said. "We're glad they called because now we can obviously make sure that we conduct our investigation in conjunction with the Harris County Institute of Forensic Sciences to determine who this individual is and what may have happened."

There weren't any apparent signs of trauma on the body, according to Gonzalez. Investigators believe the body may have been dropped off with a load of trash at the facility as early as Wednesday morning.

"Perhaps that's why they located it -- because it was on top of the pile instead of deeper, and the body still seemed to be fairly intact," Gonzalez said.

@HCSOTexas units responded to a waste disposal facility at 18784 E. Hardy Rd, near E. Richey Rd. While using equipment to move some of the rubbish, workers discovered the deceased body of an adult male appearing to be a white male in his late 50’s. No other details at this 1/2 pic.twitter.com/Dt1my9T09A

Gonzalez said investigators have a theory about what happened, but foul play has certainly not been ruled out.

"We're speculating a bit here. But it could be that the individual was a homeless individual. Sometimes it's not uncommon for them to be looking through trash for food or other things within trash cans or dumpsters. And then something could have happened... and eventually (the body) was picked up and moved here," Gonzalez said. "This is a transfer facility... different dump trucks come, bring debris here. Then 18-wheelers or larger trucks will come and pick up that debris then take it to actual landfills or other facilities."

Gonzalez said officials are working to identify the body and are crosschecking missing persons reports. The man reportedly had an ID in his pocket.

Investigators will do forensic tests to figure out how the man died.

Trash from all over the county is brought to the transfer facility, where it is sorted in the warehouse before it is taken to surrounding landfills. Gonzalez said investigators will look at the logs of trucks coming and going from the facility, but it's not easy to find out what trash came from what part of the county.