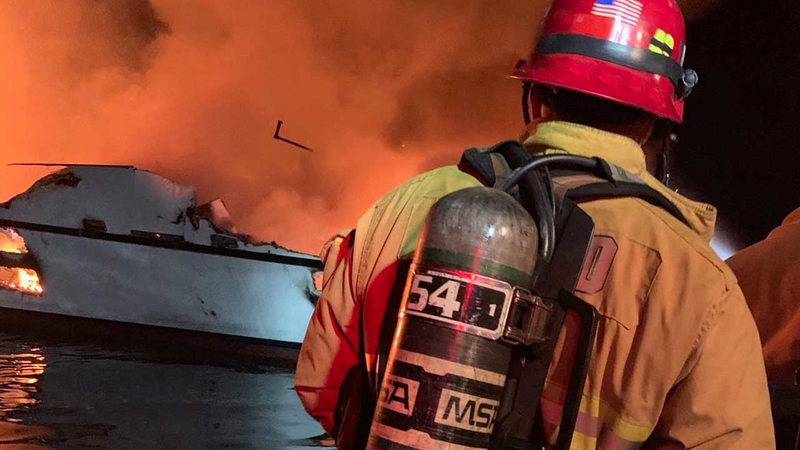 VENTURA COUNTY, California -- Five people were rescued and four bodies were recovered after a boat erupted in flames off the coast of Ventura County in southern California early Monday morning, prompting an ongoing search operation for more than two dozen people who remained missing, authorities said.

The 75-foot Conception was anchored about 20 yards off Santa Cruz Island when the scuba diving vessel caught fire about 3:15 a.m., said Mike Eliason, a spokesman for the Santa Barbara County Fire Department.

Multiple agencies responded to the scene, where five crew members who jumped overboard were rescued by a good Samaritan's pleasure craft, according to the U.S. Coast Guard. One of the rescued individuals suffered a broken leg.

The Coast Guard provided an update on a boat fire near Santa Cruz Island, California that has left 34 people missing.

The Conception sank in 64 feet of water as firefighters were battling the flames, leaving the bow protruding from the water, officials said.

The identities of the four victims who were found dead were not immediately released. More than two dozen people remained missing, the Coast Guard said.

At a morning press conference in Oxnard, a Coast Guard spokeswoman said the five crew members were awake and on the bridge of the boat when the flames broke out.

After a Ventura County Fire Department spokesman described the ongoing operation as a "recovery effort," the Coast Guard official responders were still in "response mode," which she said was still part of a search-and-rescue phase.

The operation was supported by helicopters, small boats and a patrol cutter.