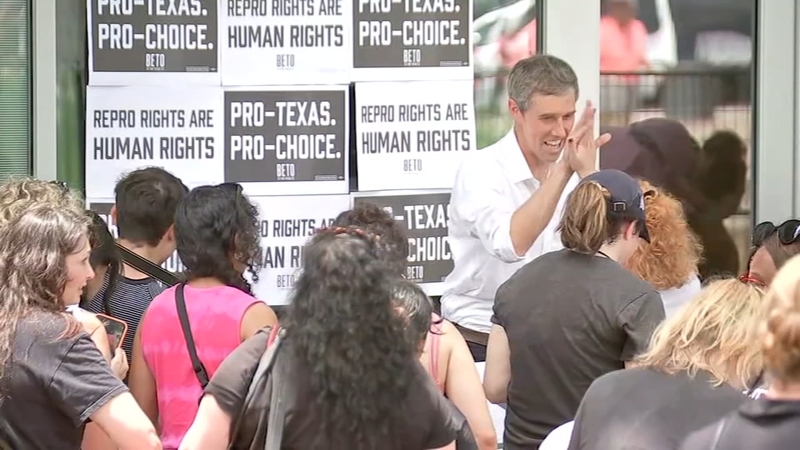 HOUSTON, Texas (KTRK) -- Despite the Houston heat, thousands of people, including city leaders and advocates, rallied alongside Beto O'Rourke on Saturday morning.

Thousands of people filled Discovery Green in downtown Houston as O'Rourke, the Democratic nominee running for governor of Texas, held a rally focused on the issue of women's reproductive rights in Texas.

The rally happened after a draft opinion from the Supreme Court was leaked earlier this week indicating a potential overturn of the Roe V. Wade ruling. This decision would lead to a country-wide overhaul of abortion rights, state by state.

Despite the support for O'Rourke at the rally, his fight to win in November could be difficult. A new poll released this week by the University of Texas' at Austin's, Texas Politics Project revealed Governor Greg Abbott had an 11 point lead against O'Rourke.

With 48% of the sampled registered voters favoring Abbott to remain in office, after he handily won a crowded primary with challenges from within his own party.

"The vast majority of Texans and that's Republicans. That's Democrats. That the Independents (who) want to protect the right of every woman to make her own health care decisions. About her own body and her own future. That's why you saw nearly 5,000 people out here today in Houston at Discovery Green and that's just here in Houston this is across the other 253 counties as well. Greg Abbott is attacking the people of Texas when he should be helping us right now," O'Rourke said to a group of journalists on Saturday.

Amy O'Donnell with Texas Alliance for Life said if Roe V. Wade is overturned, abortions will effectively become illegal in Texas but there will also be supportive programs to help women through their pregnancy and after birth.

"Texas is ready," O'Donnell said. "Our legislature has appropriated $100 million towards the alternatives to abortion program that is for the biennium that money goes to pregnancy help centers, maternity homes, adoption agencies that support women up to birth and even up to three years after birth."