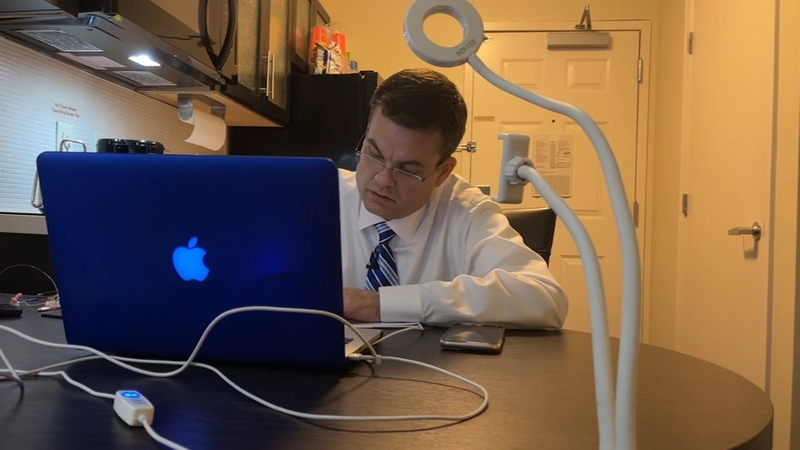 HOUSTON, Texas (KTRK) -- Working remotely has evolved from a necessity during a pandemic to a convenient option for countless telecommuters. A southwest Louisiana television meteorologist is proving it can work for cancer fighters too.

Ben Terry, a meteorologist for KPLC-TV in Lake Charles, was diagnosed with colon cancer late last year. It was just the latest crisis for Terry following Hurricanes Laura and Delta, devastating floods and record-breaking winter weather in the region. He learned about his diagnosis after a colonoscopy.

"You think you're just going in for a routine procedure and you end up finding out you have cancer," Terry said. "That was not expected after what we'd just been through with the hurricane season and now this."

Hurricane Laura destroyed his Lake Charles home in Aug. 2020 and heavily damaged the television studio where he worked. Prior to landfall, Terry and most of the KPLC-TV staff evacuated to Baton Rouge two hours away where they provided updates remotely for weeks. He's been living with a friend since the destruction.

Once he was diagnosed, doctors tried chemotherapy, but it wasn't effective.

Colorectal cancer is the second leading cause of cancer-related deaths in the United States, according to Houston Methodist. When treated early, it's nearly 100% curable.

Doctors hope radiation therapy will shrink the mass inside his body to a size suitable for surgery. Once that happens, he'll have a long road to recovery.

RELATED: The pandemic forced a massive work-from-home experiment. What happens next?

"The radiation has to be done five days a week and it has to be done here in Houston," Terry said. "I live in Lake Charles. I can't physically drive back and forth. If you've ever been to Lake Charles from Houston, it's not a fun trip to do once a week, let alone once a day."

Each weekday morning, Terry arrives at Houston Methodist Radiation Oncology in the Texas Medical Center for a process that takes less than ten minutes in most cases.

SEE ALSO: When to get colon cancer screenings

Until his sessions are complete, Terry is staying in a Houston hotel where he continues to forecast the weather for southwest Louisiana. He still commutes to Lake Charles, a two-and-a-half hour trip, on weekends.

"COVID allowed me to work remotely, and it made it a lot easier to switch back remotely to the hotel, because you can do it from anywhere," he said.

While the technology and effects are readily available to conceal a simple hotel room background, Terry and his team have opted to keep it real. As he appears on-camera explaining the forecast models and the region's high and low temperatures, his coffee pot has prominent placement on the kitchenette counter behind him.

"You know that's a comfort, and he's just going to pull back the curtain and let people into his life," KPLC Vice President and General Manager John Ware said. "Obviously, here at the station, all of his colleagues are incredibly supportive as well as the community at large."

Terry is scheduled to complete his radiation treatments in a few weeks and plans to keep working regardless of his location, whether it's in-person or via a robust internet connection and camera.

Thanks to good camera framing, he's even able to remain comfortable while on the job. A crisp white dress shirt and tie contrasts the shorts and tennis shoes he wears while appearing on-air.

"I could even do it in short-pants at work if the camera's set just right," he chuckled.

The COVID-19 pandemic and damage from Hurricane Laura delayed his regular cancer screenings and ultimately, his diagnosis, but Terry's prognosis is good. He said doctors are confident that, despite chemotherapy, radiation, a planned major surgery and removal of his colon, he expects his quality of life to improve, and he's determined to beat it.

"I'm not giving up. After seeing what Lake Charles has gone through with Laura and these hurricanes, they didn't give up," he said. "They're coming back, so why should I give up?"