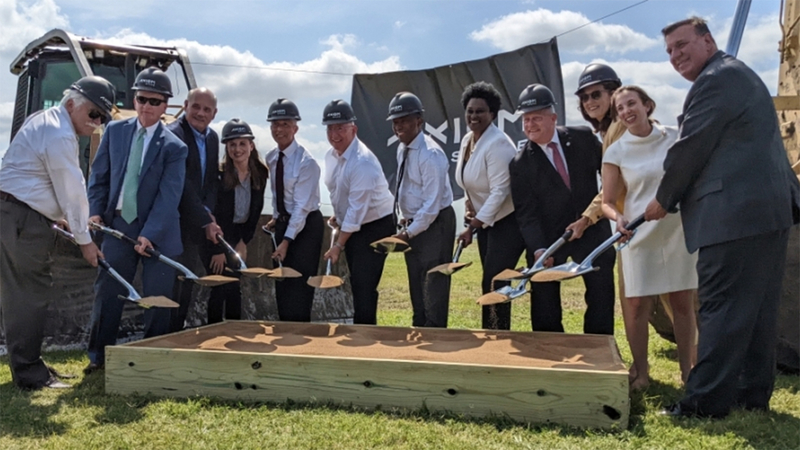 HOUSTON, Texas -- On May 11, the Houston Spaceport reached a new milestone with the groundbreaking of the largest company so far to join the spaceport.

Dan Seal, executive director of special initiatives for the Bay Area Houston Economic Partnership, said at a May 11 meeting that Axiom will build space station modules on a site that will eventually latch onto the International Space Station. When the ISS is decommissioned around 2030, the Axiom modules will separate from the ISS and link up with each other to remain in orbit as a commercial space station, Seal said.

In addition, Axiom made history with its own private astronauts in April. The first all-private astronaut mission to the ISS launched April 8 and splashed down on April 25.

Axiom President and CEO Michael Suffredini said he moved to Houston 39 years ago to join NASA working in human spaceflight, eventually becoming program manager of the ISS. During his time there, Suffredini realized Houston has engineers that design spacecrafts, astronauts who go to space and mission planners who oversee operations but no manufacturing of space vehicles, he said.

Suffrendini started Axiom Space in 2016 to fill that gap in Houston, he said.

There is no building big enough in Houston to build space station modules, so Axiom's first objective for the new campus is to build the facility where the modules will be manufactured. Suffrendini said Axiom cannot accomplish its goals without a superior workforce, and that workforce cannot do its job without a superior facility.

"All of this is only possible with a facility like this in a location like this in Space City. This is the place to do it," he said.

The facility will bring hundreds of jobs to Clear Lake. Suffredini said his company employs 450 people, but that will increase to about 1,300 by next year.

"We expect wild growth," he said.

Turner said the Greater Houston area has one of the highest concentrations of engineers in the world with nearly 2,000 engineers per 100,000 workers and that the jobs Axiom will offer will present new opportunities.

"These high-paying jobs are the future," he said.

The Houston Spaceport at Ellington Airport in Clear Lake officially became licensed as a spaceport in June 2015. The vision is to build a cluster of aerospace companies manufacturing locally and eventually have the spaceport serve as the takeoff point for passenger jets capable of flying at supersonic and hypersonic speeds.

Collins Aerospace and Intuitive Machines are two other aerospace companies under construction at the Houston Spaceport. Other companies are coming to the spaceport, though city leaders did not unveil any details.

"We are thrilled to be see Axiom Space being constructed," Houston Airport System Director Mario Diaz said. "It's going to be a very busy economic development year for sure."