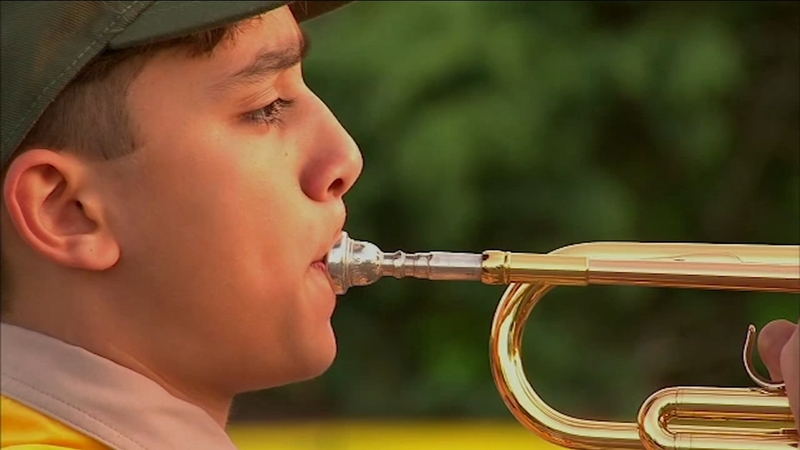 NEW JERSEY -- A 13-year-old Boy Scout has been playing Taps every night outside a New Jersey nursing home where more than 100 veterans have died amid the coronavirus pandemic, and over the holiday weekend, he concluded a special Memorial Day ceremony.

Alex Saldana joined the Passaic Valley Elks Lodge for a flag-planting ceremony outside the Paramus Veterans Memorial Home, where more than 100 small American flags were placed on the front lawn as a reminder of those at the home who have died from the coronavirus.

"Nowadays many kids might not think of this and they need to realize what these men have done for us and how they gave the ultimate sacrifice to our country," Saldana said.

It was his idea to start playing Taps outside the home, and he has played there every night since April 8.

"Fantastic. He brings tears to people's eyes when he plays," said George Osborne with the Elks Lodge.

Osborne is also a veteran. "It's a personal bond that every veteran feels when someone serves, it's a brotherhood," he said.

The Elks Lodge has held events at veterans' homes for years, and on Sunday, they placed more than 100 flags on the front lawn.

"These families are seeing their loved ones from a window, and they can't hug them," Osborne said.

Saldana's efforts mean a lot to his father, who is a veteran too.

"When that song started to play, everything just froze on base, we would all just freeze and pay respects for everyone who has come before us," David Saldana said.

Alex has been taught that respect. He points out Taps runs about 38 seconds.

"The reactions I've gotten, I've seen people get emotional, and I really understand that and I'm so happy I'm giving them hope and helping them out by just playing Taps, it's not even a minute, but it's helping them so much and I'm so grateful for doing that," Saldana said.
Report a correction or typo
Related topics:
health & fitnessnew jerseyhealthmedicalcoronavirusveteransu.s. & worldcovid 19 pandemicmemorial daycovid 19 outbreakcovid 19
Copyright © 2022 WABC-TV. All Rights Reserved.
CORONAVIRUS
HPD Chief Troy Finner tests positive for COVID-19
How sex could play a role in developing long COVID: Study
COVID vaccine rollout begins for young children, babies
US authorizes first COVID shots for kids under 5; CDC review is next
TOP STORIES
3rd monkeypox case confirmed in Houston area, officials say
There are many ways to eat healthy amid high food prices, experts say
Biden signs landmark gun measure, says 'lives will be saved'
A hot weekend ahead of more widespread rain chances next week
Bank of America apologizes to refugee family for account mix-up
6 people killed over span of 12 hours in isolated incidents in Houston
Love the outdoors? Galveston Island State Park is reopening
Show More
Astros' 2nd time ever to no-hit NY
Houston Pride 2022: Where and how to celebrate
Teenage daughter stabs father during fight in SW Houston, police say
17-year-old charged with murder after giving friend ride
Settlement would forgive $6B for defrauded college students
More TOP STORIES News