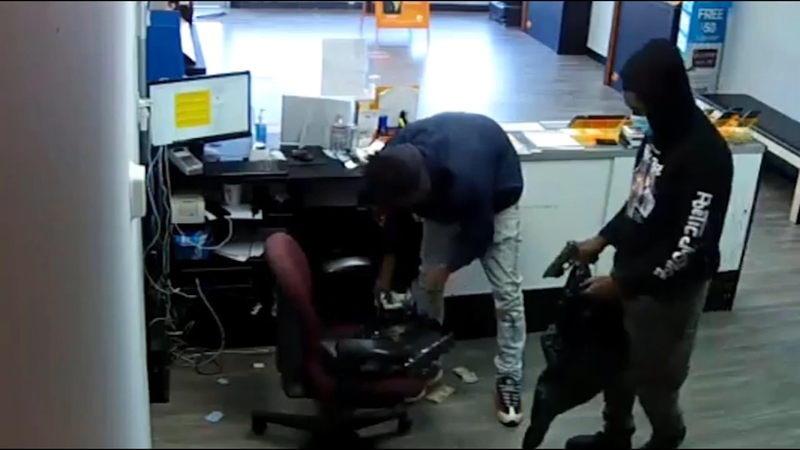 HOUSTON, Texas (KTRK) -- Police are looking for two gunmen accused of stealing from a cellphone store in southeast Houston.

The robbery happened on Thursday, March 24 around 4 p.m. in the 1000 block of Edgebrook near the Gulf Freeway. HPD released surveillance video of the incident this week.

"I'll give you guys what you want. The money's over here, I swear to God," the employee was heard saying after the suspects started making demands.

"Open it right now. Open!" one of the suspects demanded. "It's right there, bro. It's open," the employee replied, pointing behind the register.

You can watch the surveillance footage in the video player above.

At first, police said the suspects walked up to an employee and acted like customers. However, they then pulled out handguns and demanded money and cellphones from the back office, HPD said.

Police said the men escorted the employee to the back office and made him fill a bag up with cellphones.

The suspects got away with money and cellphones, and even took the worker's car keys, before stealing his car from the store, police said.

Police found the stolen car a short time later in the 10900 block of Gulf Freeway.

The first suspect is described as a Black man wearing a black hoodie and dark pants during the aggravated robbery.

HPD said the second suspect is a Black man who was wearing a blue jacket and blue jeans at the time of the incident. Both men were armed with handguns.