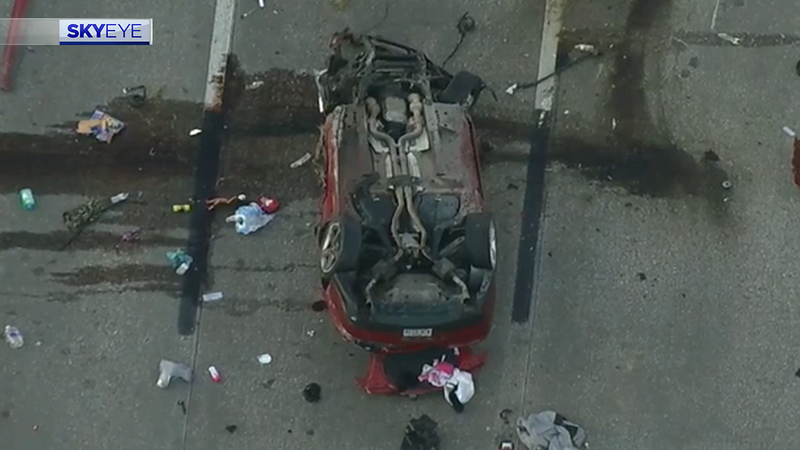 2 killed in W Houston chase that ended in fiery crash

HOUSTON, Texas (KTRK) -- A chase came to a fiery end and two were killed, including an innocent driver, in west Houston early Friday morning.

It happened just after 4 a.m. on the northbound feeders of the West Beltway at Clay Road.

A Harris County Precinct 5 deputy constable was driving on the West Beltway when the driver of a red Camaro sped by without headlights on, authorities said.

That's when the deputy attempted to pursue the driver.

Pct. 5 officials say the Camaro was traveling up to 100 mph.

The driver momentarily slowed down but took off again. The deputy was not able to keep up because the Camaro was traveling so fast, the constable's office said.

After about a four minute pursuit, the Camaro exited the Beltway at Clay Road and struck an innocent driver in a Ford Ranger at the intersection.

By the time the deputy made it to the crash, the Ford Ranger was engulfed in flames, according to the constable's office. The deputy used his fire extinguisher to try and put out the flames.

This is what a huge car fire looked like on the west side of town on the Beltway at Clay Road.

TranStar cameras recorded the fire in the roadway. You can see the thick smoke billowing from the truck in the video player above.

Deputies say the innocent driver was trapped in the burning truck, unable to get out in time.

The Camaro flipped and landed upside down on the feeder, and the driver was ejected, deputies said.

"He likely never saw what hit him," Assistant Chief Terry Allbritton said of the innocent driver. "It was a very violent impact."

Deputies are still working to identify the suspect and the innocent driver.

The northbound West Beltway feeder road was blocked at Clay Road for several hours as authorities investigated the scene.