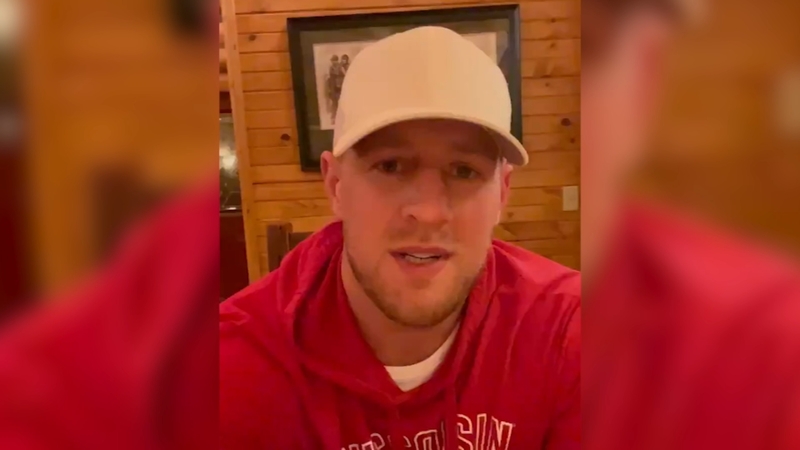 JJ Watt announces his departure from the Houston Texans

HOUSTON, Texas (KTRK) -- J.J. Watt, the face of the Houston Texans since 2011, is leaving the only NFL team he has played for.

In a Twitter video Friday morning, the three-time NFL Defensive Player of the Year announced that he sat down with the McNair family and asked for his release.

You can watch his full announcement in the video player above.

"I came here 10 years ago as a kid from Wisconsin had never really been to Texas before," Watt said. "And now I can't imagine my life without Texas in the way that you guys have treated me."

He went on to explain his love for the City of Houston.

SEE MORE: What fans get when JJ Watt says 'ask me anything'
EMBED More News Videos

"The City of Houston has been unbelievable to me it's where I met my wife. It's where I've met lifelong friends," he said.

CONGRATS! The happy couple tied the knot in a surprise Bahamas ceremony on Valentine's weekend.

Although Watt did not detail his future plans, he said he was looking forward to a "new opportunity."

"Change is never easy, especially when it involves the ones you love. J.J.'s impact on not only our organization, but the entire Houston community, is unlike any player in our franchise's history," said Texans Chair and CEO Cal McNair in a release. "I told J.J. earlier this week that we will forever consider him a Texan. We take solace in knowing that this is not a goodbye but a 'see you soon.' For now, we will build upon the foundation that J.J. created here and forge ahead with our unwavering mission to bring a championship to our city, create memorable experiences for our fans and do great things for Houston."

Always a Texan. Thank you, @JJWatt.https://t.co/2RNwmXRdKZ

In addition, ABC13's Greg Bailey revealed the timing in which the talks for separation began.

"Simply put, there has been no person in the past decade who has made a greater impact on the Texans organization than J.J. Watt," added Co-Founder and Senior Chair Janice S. McNair. "J.J.'s dominance on the field was unprecedented and resulted in countless moments that will go down in Texans history. To me, what best represents J.J.'s connection to Houston is his tradition of playing catch with the fans before every home game. The number of people who wear #99 jerseys with smiles on their faces totally encapsulated J.J.'s passion for bonding with Texans fans at every possible opportunity. His commitment to the community is unlike any player in NFL history. We are forever grateful to J.J. and his family."

“His commitment to the community is unlike any player in NFL history.” pic.twitter.com/f5VpW8frcK

Off the field, Watt's response to Hurricane Harvey in 2017 helped him earn the prestigious Walter Payton NFL Man of the Year Award. The hurricane made landfall in Houston as Watt and the Texans were away playing their third preseason game. While watching the events unfold from afar, Watt posted a video on social media announcing a fundraising campaign with a very attainable goal of $200,000, to which he intended to match the first $100,000. Instead, in just 19 days, Watt helped raise more than $37 million.