13 Investigates: How many people have received aid from Harris County's Harvey program? Zero.

KTRK
By Ted Oberg and Sarah Rafique
HARRIS COUNTY, Texas (KTRK) -- Drew Gadd has been waiting for help from Harris County for so long, he almost forgot how many years have passed since Hurricane Harvey.

"When was the storm?" Gadd said when 13 Investigates asked how long he's been living in a gutted, unfinished home. "It seems like it's been so long, you know, I can't even keep up with the dates anymore."

For 36 hours, Gadd said he sat in his living room with his dog as the water filled his home up to his knees when Harvey made landfall in August 2017.

"It came in through the doors. That door bucked so it was just wide open," Gadd said. "There was nowhere for it to go. Everybody was flooded here."

Gadd is one of more than 5,700 homeowners who have either filled out pre-application surveys or been invited to apply to the county's $800 million recovery program for Harvey storm victims.

Not a single one has received that aid.

Zero people have been issued reimbursement checks. Zero homeowners have been helped by a buyout program and zero hammers are swinging to rebuild storm victims' homes.

Now, like thousands of other residents in Texas' largest and hardest-hit county, Gadd is still waiting for help two years and three months after the storm.
EMBED More News Videos

The county admits it continues to employ a contractor who hasn't delivered results.

"We aren't on target to meet the goals that we set for ourselves," said Daphne Lemelle, community development director at the Harris County Community Services Department. "But we are making traction."

ICF International, the private Virginia-based company tasked with making sure homeowners applications are turned in and complete, questioned Harris County's account of its performance.

On Monday, Lemelle said ICF, who was hired by the county in February, has only given the them 500 applications - all incomplete - despite being paid $1.3 million.

ICF told 13 Investigates although it serves new applicants through outreach and at intake centers "the county manages the processes and moves forward with all of the applications."

"ICF is responsible for the outreach and intake portions of Project Recovery - making sure that residents know about the program, meet with a case manager as needed, and are able to initiate an application for relief funds," the company said in a statement on Thursday.

Still, Lemelle said a lack of results led the county to hire a second intake vendor, nonprofit Baker Ripley, to help increase the volume of applications.

13 Investigates' Ted Oberg asked Lemelle about the funds the county has paid ICF so far.

"$1.3 million is a lot of money, but there are people working in those (intake) centers every day. They are taking calls and they're seeing clients in those and we are getting files," Lemelle said. "Should the files be 100 percent complete? Definitely. It's a very complicated program. A lot of missing pieces can happen.

"We know we've probably lost trust with a lot of the community because of the slow progress. But know that Harris County stands here, I stand committed to make sure folks will get help," Lemelle said.

Thursday morning, the county said Gadd still owed taxes, which is why his application didn't move to the next phase in the process. After emails from 13 Investigates indicating Gadd has a payment plan to pay his taxes, the county ultimately said his file was complete and able to move to the next step of the program.

EMAILS: Read the full exchange between 13 Investigates and the county regarding Gadd's status

Gadd is not alone in having to visit an intake center multiple times just to make sure the county has all the documents it is requesting.

Whenever a storm victim visits a center, they meet with a specialist who helps them fill out the application. Ideally, it should take one visit, Lemelle said. ICF is then expected to deliver a complete intake file to the county, including all the supporting documentation needed to determine eligibility for either the reimbursement, buyout or homeowner assistance program.

But, Lemelle admits she doesn't know of any homeowners who only had to come in once to finish their application. On average, she'd like to get the number of visits to two or three meetings.

"That's not fair," Lemelle said. "But sometimes when we get a file and we review it, and in all fairness to everyone in this process, once you get into the details of someone's situation, there could be missing information and so you need to call them and let them know we need to meet with you or here's a document checklist."

The county is now paying two vendors to operate a program that has helped zero people all year.

Once Baker Ripley was hired, the county added five more intake centers that residents can go to to apply. There are a total of 10 centers now, but the county hasn't updated its website's homepage to include locations for the new centers. 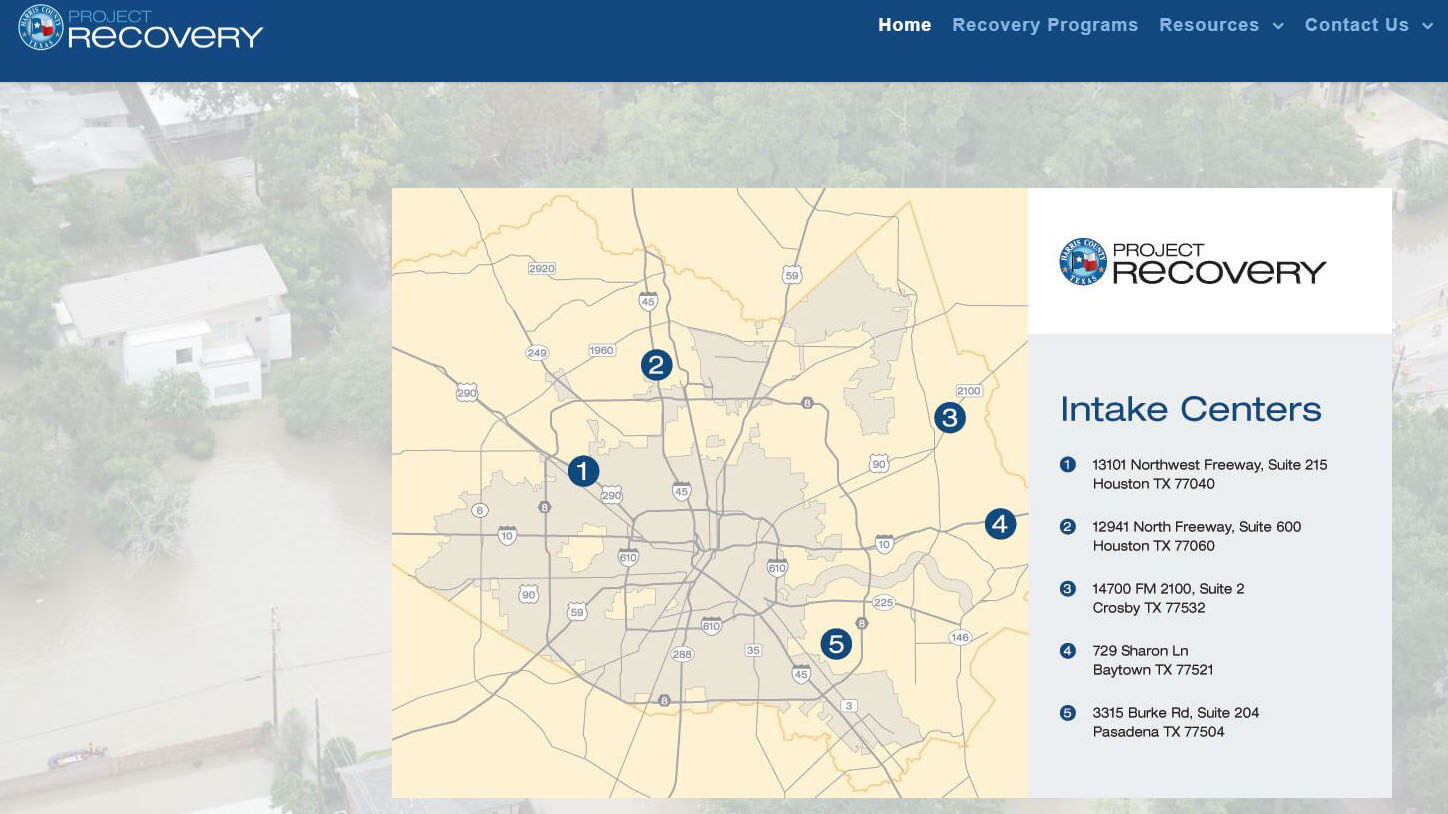 "We've told ICF that we're monitoring their performance and that they're under a contract," Lemelle said. "So obviously if we believe that their performance is not up to par, which is something we continue to review every month, every day, every week, we will let them know where they stand and that's why we had to bring on another intake vendor."

The county previously said its goal was to issue 150 checks by November, according to a pipeline report from Sept. 3. The goals for this month also included starting construction on 50 homes and complete four buyout closings. 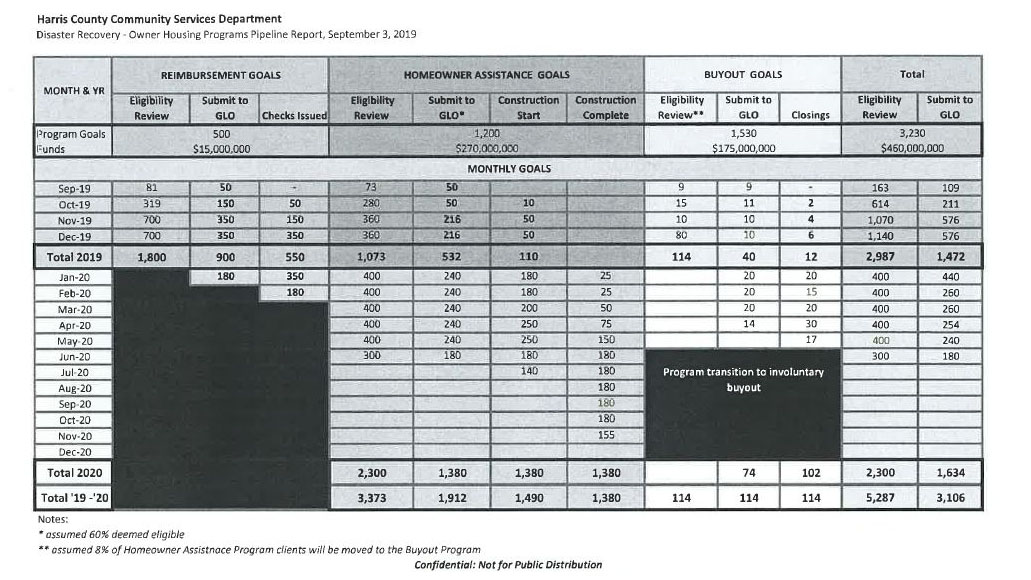 A screenshot of Harris County Community Services Department's Disaster Recovery pipeline report from Sept. 3, which was provided to 13 Investigates.

Two months into the program, ICF was told it needed to increase the quality of applications, Lemelle said. The company also replaced its entire management team in Harris County and about 70 percent of its staff.

"They recognized they needed to change and they have made changes. There have been improvements in the quality of their files," Lemelle said. "The files are about 70 percent complete. We're still having to get a few more documents, but that's a huge change where before the files we got were about two percent complete.

ICF said it conducted more than 2,000 initial intake consultations in October and November. It believes its performance is in line with the contract requirements and expectations.

"While the overall recovery process takes longer than anyone would like, we feel the changes we have made, and will continue to make, will help the outreach and intake functions of Project Recovery," ICF said. "We will continue to monitor performance, analyze systems and make any necessary updates to support the residents of Harris County with speed and agility."

Harris County's contract doesn't specify pay for performance, but it does allow the county to fire them. Lemelle would only say they are monitoring ICF's performance.

The county has denied about $345,000 in invoices ICF submitted to the county, saying it doesn't believe the company performed the work it was charging for.

"Some of the things they were saying is that they were doing eligibility work and some other things which they are not doing for us and so we did deny that," Lemelle said.

Although Harris County, along with the City of Houston, were granted the ability to run their own disaster recovery programs using federal funding, all of their applications go through the Texas General Land Office for final approval.

"We compare ourselves to probably most likely the City of Houston, who I know they've gotten a few more files through than we have," Lemelle said. "Beyond that, there's no other comparables at this point."

The City of Houston's latest pipeline report from October 31 shows 91 applicants have been approved by the GLO, either for construction or to receive a reimbursement check. That's less than two percent of the 5,525 homeowners who were invited to complete an application.

In Harris County, Lemelle said there's been 42 applications submitted to the GLO for approval. While discussing new goals, Lemelle wouldn't provide the exact number of individuals that will receive help by the end of the year.

"I will go on the record and say that we will have some reimbursement checks going out (this year) because we have files with GLO today that everyday I'm checking on because we need to get folks their money," she said. "...We have 42 in pipeline, so the most I'm willing to commit are those 42 without knowing what's going to be happening tomorrow."

She said everyone who applies and is eligible will be assisted.

"It doesn't do the county well or me well to sit there knowing we're not getting money out the door," Lemelle said. "It benefits nobody. We have tons of homeowners who were affected by this and we know that is our priority every day. Despite where we stand today, that is what I tell our team. It's not about what makes it easy for us. It's how do we get this money out the door quicker."

Two years and three months after the storm, Gadd wonders if he'll ever get help from the county.

Have a tip for Ted Oberg? A problem to solve? Get in touch with us on our tip page, or send a tip below. (On mobile? You can open our form by tapping here.)
Related topics:
harris countyted oberg investigateshurricane harvey
Copyright © 2021 KTRK-TV. All Rights Reserved.
TED OBERG INVESTIGATES