Houston 23-year-old warns of severity of COVID-19, even in young people 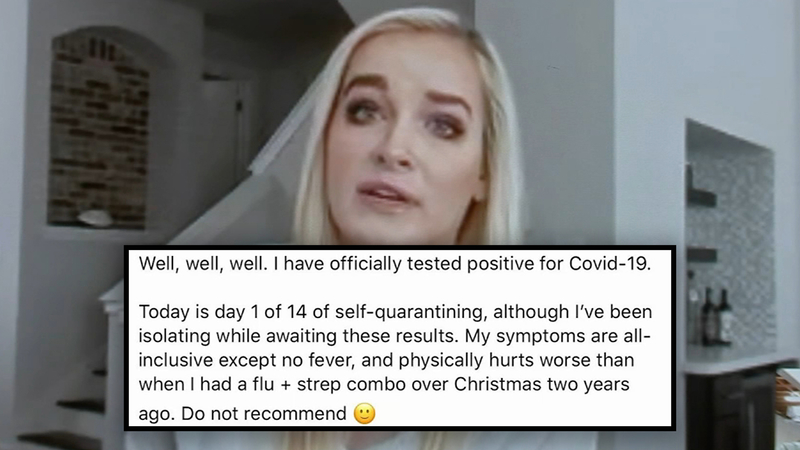 HOUSTON, Texas (KTRK) -- A Houston-area 23-year-old who says she took every precaution to not get COVID-19 has a warning for other young people about the severity of the illness.

Peyton Chesser, 23, is on the mend after testing positive for COVID-19 and dealing with a range of symptoms like fatigue, body aches, skin sensitivity, cough and a loss of taste and smell for eight days. She says it's the most sick she's ever been.

"It was definitely very scary...The anxiety from it all was really awful," Chesser recalled. "I was really nervous because of everything I have seen of the horror stories, everything that's happened to other people"

Chesser is one of a number of young adults who health officials are now seeing that contract the virus and are getting sick.

"Most people I know that have had it at this point have all various symptoms, even if they were minor," Chesser said.

She believes she passed the virus on to her boyfriend and roommate. Both of them tested positive, but they didn't show nearly the same severe symptoms.

Chesser posted her experience on social media, warning others that the severity of the virus varies.

"We have a responsibility to take care of each other and do small things that could have a large impact as far as wearing a mask, staying home when you're not feeling well," Chesser said.

As some place blame on younger adults on the spike in cases, Chesser says it's not fair and believes the state reopened too soon.

SEE ALSO: 'If I could go back:' Gov. Abbott regrets reopening bars during COVID-19

"They're only doing things that they were told they were allowed to do," Chesser said. "If the state is opening up and allowing activities to occur, you can't be mad when people are following that level of guidance."

Chesser isn't sure where she may have gotten the virus, and says she was very careful.