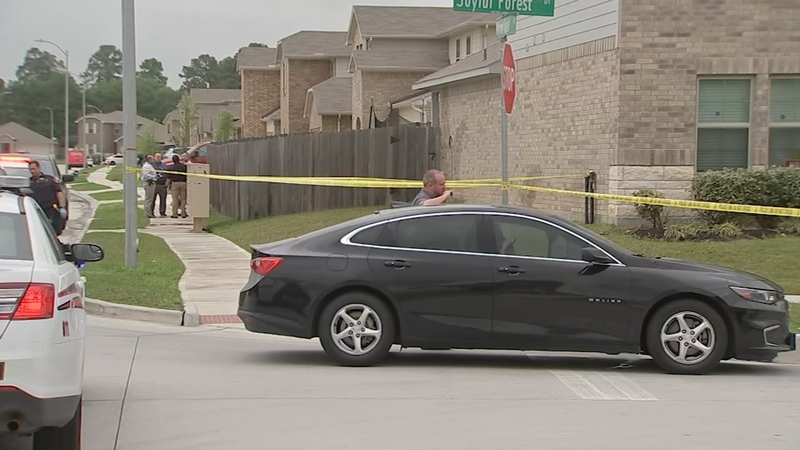 SPRING, Texas (KTRK) -- It was a scary morning for a family in northeast Harris County when a stranger wouldn't leave their front porch, and moments later, shots were fired.

SkyEye video from above the home in the 2500 block of Joyful Forest Drive in the Breckenridge Forest Subdivision showed a lot of blood on the driveway and in the entrance area of the home.

ABC13 reporter Erica Simon spoke with the homeowner involved off-camera, who said she was still trying to process everything that happened Thursday morning just after 6 a.m.

The woman said she was getting her kids ready for school when she noticed a man she didn't recognize on her front porch.

An unknown male was shot in the forearm by a homeowner after she reported he refused to leave her property.

Eventually, she came outside. Deputies said while holding the man at gunpoint, she called family members for backup.

When the man did not comply with the homeowner's request to leave, she fired her gun, investigators said.

"Mom was getting ready to actually take the kids to school, and that's when she was alerted from her motion that somebody was on her front porch. And that's when all this started," Investigator Bryan O'Neal said. "So definitely not a good way to start your morning on Thursday morning."

Deputies said the mother shot the man between four and six times. The woman's boyfriend, who lives nearby, showed up at the scene and also reportedly fired his gun.

The man was taken to the hospital, where he underwent surgery. His condition and identity are unknown. Investigators believe he is between the ages of 45 and 50.

There are still a lot of questions about why the man was at the home in the first place. It is unclear if he was at the home by mistake or was possibly intoxicated at the time of the shooting.

When it comes to possible charges, the Harris County District Attorney's Office will be reviewing the case. The homeowner is cooperating with investigators.

Deputies said the mother and her children were unharmed.