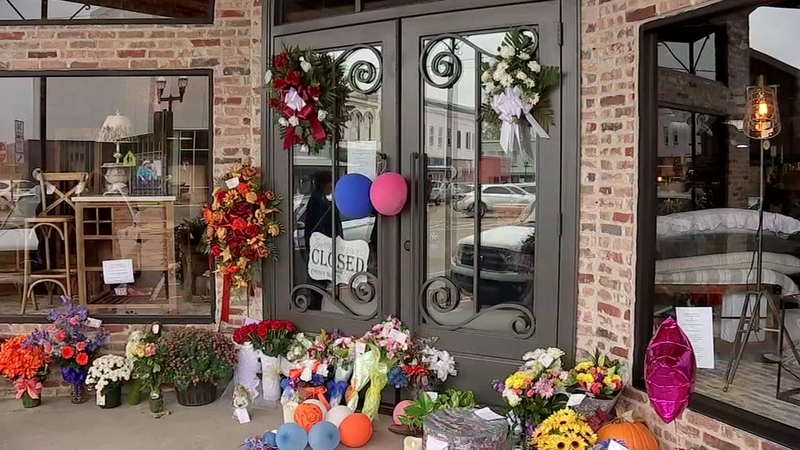 BELLVILLE, Texas (KTRK) -- An estimated 2,000 people filled Bellville's United Methodist Church, and its overflow area for the funeral of a newlywed couple.

Others stood outside, despite a chilly wind on an abnormally cold November day.

Will Byler, and his bride Bailee were killed last week at the Byler family ranch in Uvalde, when the family's helicopter crashed.

The couple were married for less than two hours when they died, on the way to their honeymoon. The pilot was also killed. The NTSB is investigating the cause of the crash.

The bride was from Vidor, where a separate funeral service was held Thursday. Friday was the second, in the town where Will Byler was raised and attended school.

"They each met their one," said Melissa Weiss, who works next to the store owned by Byler's grandmother, and where his mother also works.

A sign on the door informed people that it would be closed all week, out of respect for the family. Flowers started arriving as soon as the town learned of the tragedy. They were placed outside the doors, with cards attached. A separate box was set up for sympathy cards.

"I'm proud to say that not a single arrangement or flower has been disturbed," said Weiss.

Mourners included one of Will Byler's teachers at Faith Academy in Bellville, who smiled when she spoke of his mischievous streak.

"He'd ask if a test was optional," she said, with tears in her eyes.

The couple will be laid to rest at the family ranch in Uvalde, where their wedding was held six days ago.

"It teaches us that life isn't guaranteed," said one woman. "But we can take comfort that they left this world, and arrived in heaven, hand in hand."