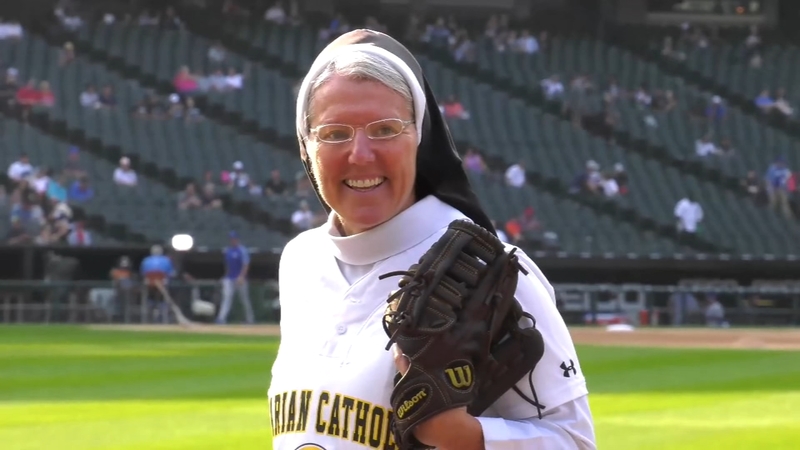 The White Sox called the pitch, "One of the most impressive first pitches of all time."

Marian Catholic High School was celebrating its 60th anniversary at the Sox game.

Sister Mary Jo said she was picked to throw out the first pitch, "because I had a little bit of athletic ability, I was probably the most likely candidate, because of my youth and my agility."

When asked about making her throw from the mound and not closer to the plate, like some ceremonial first pitches, Sister Mary Joe said, "As an athlete, you gotta be all in, and I knew that my coaches and my teammates, when they saw that, they would be like, 'You gotta do the real thing,' and it's all or nothing. I had to do it from the top."

One of the most impressive first pitches of all time. 😱 pic.twitter.com/PA7M4iC9X5

Before she made her throw, Sister Mary Jo impressed by bouncing the ball off her bicep and into her hand. She said she did the trick to take her mind off being nervous.

"I had to do something to take my mind off it," Sister Mary Jo said. "It's too awkward to just stand and throw from the jump and I had to just do something to put me in motion."
Report a correction or typo
Related topics:
sportsillinoisreligionnunu.s. & worldchicago white sox
Copyright © 2022 WLS-TV. All Rights Reserved.
RELATED
Nun dazzles with first-pitch strike at White Sox game
TOP STORIES
Timeline breaks down Uvalde shooter's movements day of massacre
3 dead in apparent murder-suicide in NW Harris Co., sheriff says
TX school shooting leaves at least 19 children, 2 adults dead
Uvalde school shooting: What we know about 19 kids, 2 teachers killed
Beto O'Rourke confronts Texas gov. at Uvalde shooting press conference
Houston mayor after shooting in Uvalde: 'Our values are messed up'
HISD staff encourage talking with kids about Uvalde tragedy
Show More
Where do Texas gun laws stand?
Mother of Houston Olympic champion receives donated food truck
More firearm dealers than mental health providers in Uvalde
How Houston can help Robb Elementary School shooting victims
Here's what to know about NRA meeting in Houston
More TOP STORIES News