Helen Mirren talks about lending her voice to 'When Nature Calls' 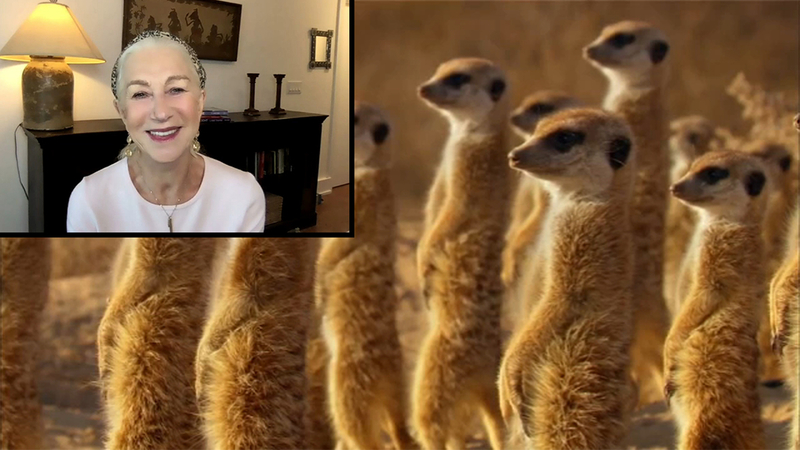 Helen Mirren talks about lending her voice to 'When Nature Calls'

NEW YORK -- On YouTube, talking animals rack up millions of views. The videos show wild animals that are given human voices through skilled editing in post-production, and the result can be hilarious.

Mirren is show-business royalty, in fact, she's even won an Oscar for playing "The Queen." But the star is more down to earth than her many accomplishments might suggest.

When the coronavirus pandemic shut down live music for more than a year, musicians had to put their careers on hold -- which is especially hard if you're a rising star on the verge

"I like to think I have a good sense of humor," Mirren said. "And I do like to laugh a lot, you know, and I love it when I say something funny and people laugh."

Turns out, Mirren is equally at home getting laughs with the new ABC TV series as she is performing Shakespeare.

"When Nature Calls" airs at 8 p.m. ET, Thursday nights on this ABC station.

"When Nature Calls" has the veteran star narrating a show that pokes gentle fun at the residents of the animal kingdom by giving them a voice.

While Mirren is the first to admit she is not a comic, the show works by playing to her serious persona.

"The only way I can do a comedy is by being really serious about it so I'm just very, very earnest," Mirren said.

When asked if the new series that some call "a bit of a lark," she replied, "Yes, that's a perfect description."

After decades of work and accolades, when it comes to choosing her projects, Mirren can pretty much do as she pleases.

"Yes, I think that is true," she said. "Although I have to say, sort of my whole career I tried to do what I wanted to do, you know, rather than what I didn't want to do. And I never really paid much attention to fame and glory through that. I just did what I wanted to do."

A few years ago, Eyewitness News Entertainment Reporter Sandy Kenyon took his niece to meet Mirren, and he says the star was so gracious, warm, and welcoming. He says she took plenty of time with them, even though she was the center of attention at a party in her honor.

Stunning, staggering, relatable. #WhenNatureCalls is calling tonight at 8|7c! See you there 😉 pic.twitter.com/xYW1nCgjyo