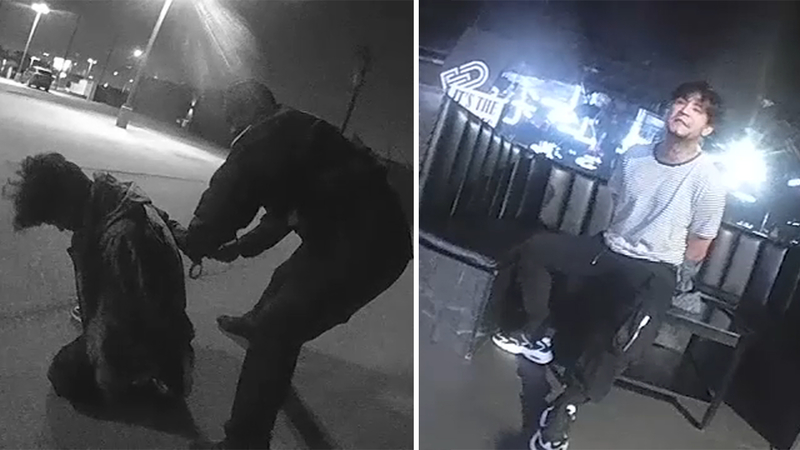 HOUSTON, Texas (KTRK) -- A Katy man promised to "get that bond" after being arrested with a loaded AR-15 outside a Washington Avenue nightclub earlier this month, according to video obtained exclusively by Eyewitness News on Wednesday.

David Mena Jr, 28, was arrested outside Hearts Nightclub on April 5. He is charged with attempted aggravated assault with a deadly weapon.

He got into a fight at Heart nightclub, and when he was escorted out, he threatened to "go get a gun and return to shoot."

The video is from a body camera worn by a deputy with the Harris County Sheriff's Office.

ABC13 obtained it through a public information request to the Harris County District Attorney's Office after it was presented as evidence at a court hearing. HCSO called the same request "invalid."

"Drop it! On the ground! Now! Before we shoot!" yelled one deputy as he raced to intercept Mena, who, according to court records, was close to following through on a violent threat.

"It could have been a pretty tragic event," said Eric Batton, the 1st Vice President of the Harris County Deputies' Organization FOP Lodge 39 after watching the video. "I think these deputies did an exceptional job."

The two deputies, with only pistols, got Mena to surrender. The video showed the rifle, and on several occasions, Mena promised to make bond.

Mena was already out of jail on bond for robbery-bodily injury and unlawfully having a gun at the same nightclub a few weeks before. Simply being at the club that night was considered a violation.

A witness warned officers Mena was coming back after he was thrown out of the club after a fight, something the deputy commented on in the video.

"I'm happy we got tipped off," the deputy said.

In a statement, HCSO said, "Deputies Green and Atkinson relied on their training and experience to de-escalate a potentially deadly situation and save lives. We are grateful they were able to resolve a highly volatile situation peacefully."

It's something Batton said the public does not often get to see.

"You have officers who go out there every day and try to serve their community and improve the community they serve," Batton said. "This ended because the deputies did a great job."

Mena remains in jail on a $100,000 bond. The bonds for his previous charges were revoked. His attorney did not respond to a request for comment.