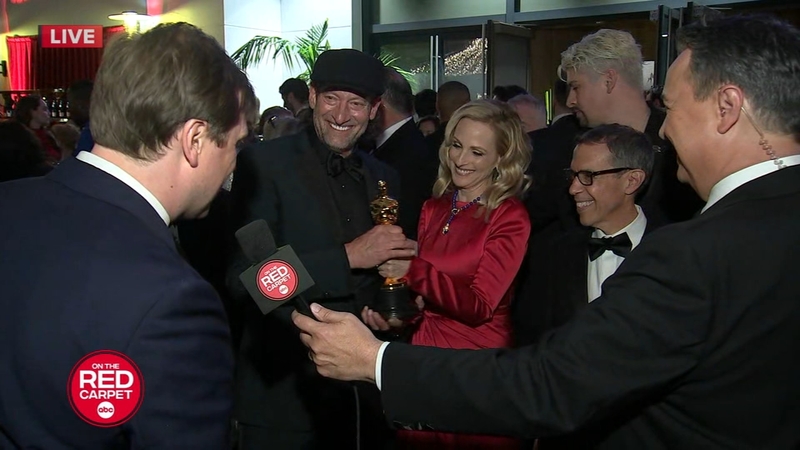 LOS ANGELES -- Now that the Oscars are over, the Hollywood glitz and glam goes on.

Dozens of winners and other celebrities headed out to the various after parties all over Los Angeles to celebrate the end of a long awards season, often ditching their red-carpet attire for new party-ready looks.

Here's what you need to know about 2022's Oscar parties:

This year's Vanity Fair party, hosted by editor-in-chief Radhika Jones, returned to the Wallis Annenberg Center for the Performing Arts in Beverly Hills.

What makes the glossy magazine's soiree so special?

"To me, it's because they have In-N-Out burgers inside," Rebel Wilson said. "And I love In-N-Out Burger -- it's just so Los Angeles, it's so Hollywood."

Rosie Perez, Rebel Wilson and John Leguizamo were among the many stars who attended the Vanity Fair party after the 94th Academy Awards.

A-listers were invited to pose in front of photographer Mark Seliger's custom-built portrait studio inside the after-party, which John Leguizamo described as "the best party in Hollywood."

"And then I'm going to go to Madonna's party," Leguizamo said. "It's called 'The Party' for a reason."

Immediately after the Oscars broadcast, the Governors Ball was held at the Ray Dolby Ballroom on the top level of Hollywood & Highland.

Among the attendees was Daniel Dae Kim, who shared his reaction to the shocking confrontation between Will Smith and Chris Rock.

"That was a stunning moment," Kim said. "It was something I'll remember for a while."

Actor Daniel Dae Kim shared his reaction to the shocking confrontation between Chris Rock and Will Smith onstage at the Oscars.

Many who witnessed the incident initially thought it was a joke.

"I did too, because I'd never seen anything like that on television before," Kim said. "But that's live TV, I guess."

The luxury automaker hosted a viewing party for stars and insiders from the Four Seasons Los Angeles at Beverly Hills, according to The Hollywood Reporter.

Actor Jason Momoa revealed that he had undergone surgery one day before attending the 94th Academy Awards.

It was the 30th year the singer has hosted a viewing party to raise money for his Elton John AIDS Foundation.