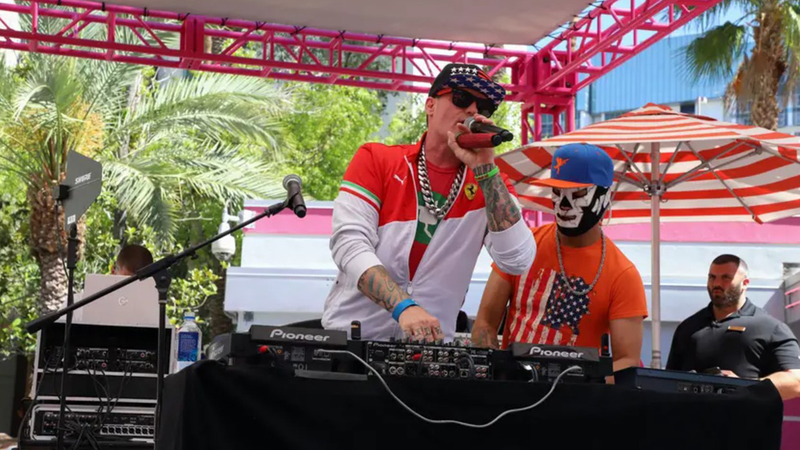 The artist contacted owners of the venue and said he doesn't plan to perform because of 'blow back' about a capacity dispute with Travis County, according to KTBC-TV reporter Rudy Koski.

Vanilla Ice just called the owner of Emerald Point Bar & Grill and told him that he is pulling out of Friday’s Show- event canceled due to blow back on capacity dispute with TRAVIS Co @fox7austin pic.twitter.com/glAtBZPUxZ

Vanilla Ice seemed to dispute that claim by taking to Twitter and explaining that he didn't realize the high number COVID-19 cases in the area.

Due to the increase in COVID-19 numbers in Austin we’re gonna move the concert to a better date. We were hoping for better Coronavirus numbers by July but Unfortunately the numbers have increased quite a bit so for the safety and health of everyone we’re going to stay home. pic.twitter.com/MWWfNWf3zd

As coronavirus cases continue to surge in Texas, the Emerald Point Bar & Grill had planned to host the show on Friday.

The venue's organizer told The Texas Tribune that only 84 tickets had been sold as of Wednesday night. Barret Brannam, owner of Emerald Point Bar & Grill on Lake Travis, said that contrary to reports suggesting that the number of fans at Friday's show will be roughly 2,500, the maximum occupancy for the event has been set to 450 people.

That figure may have been the deciding factor in Ice's cancellation.
"We're not trying to buck the system - we're going within the guidelines we've been given," Brannam said. "Music is part of Emerald Point - and it will always be part of us going forward."

An event promoter told the Austin Chronicle, which first reported the plans for the concert, that Emerald Point is officially categorized as a restaurant because at least 51% of its sales are food. That would mean it can operate at 50% capacity under Gov. Greg Abbott's latest executive order aiming to slow the spread of the coronavirus. Under that order, bars were forced to close their doors, but restaurants can still operate at half their capacity. Local officials have the power under his order to cancel public outdoor events with more than 100 people.

He also stressed the safety precautions the venue had been taking for months and planned to implement Friday, such as taking attendees' temperatures at the entrance and requesting that they practice social distancing and wear masks. Brannam said his venue was not requiring people to wear masks because "I'm not their mom and dad, [and] I can't make them do it."

"We reduced the capacity to 450 people because that's what we thought we could space with tables," he said, stressing that the venue has followed Abbott's guidelines since the pandemic hit the state. "It's really not as gross as people are making it out to be."
On Wednesday, state health officials reported the highest number of coronavirus cases yet with 8,000 new cases. That figure more than doubled what the state's case count was roughly two weeks ago.

Brannam said 20 employees at the venue who were tested last week for the virus had negative results. He said people "can live life in a way that protects yourself" and that while the venue is enforcing social distancing measures "the best we can ... at the end of the day, there's still in this country something called personal responsibility."

Before news of the cancellation, Brannam made a grim prediction if it turned into a no-go.

"[Vanilla Ice] has already been paid," he said. "If I cancel the show ... I'm just flushing money down the toilet. ... If only a couple hundred people come out, at least those people got to see a cool show."