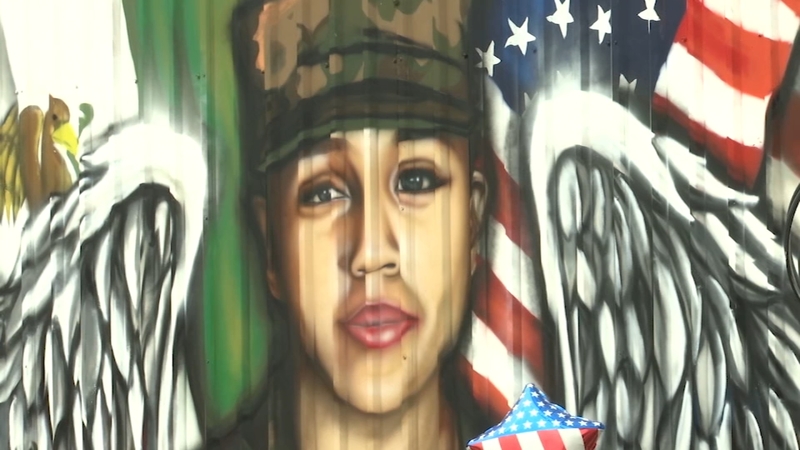 Cesar Espinoza, Executive Director of FIEL Houston, said these messages of hope are especially important for Guillen's family to help them through the tough journey ahead.

Guillen was honored in many ways throughout the past few days.

In southeast Houston at 8404 Park Terrace, a mural was painted in honor of her.

It's one of two murals in honor of the Houston native who graduated from Chavez High School two years ago. A makeshift memorial now grows in front of the mural with pictures, religious candles, balloons and memorabilia. It sits just blocks away from the neighborhood where Guillen grew up.

A local shop owner across the street, Susan Engbrock, worked with the owner of the gym, whose exterior walls the mural is painted on, to have the artists paint it. It took the artists four days to complete it.

"Everybody is just real close in this neighborhood. They grown up together," Engbrock said. "And, when something happens to one of the children at Chavez, we all feel it, and it's an impact to all of us."

Hundreds of families stopped to pay their respect on Monday.

"I saw a picture of her, and I said, 'I have to go back and pray'," resident Irma Garcia said. "I was devastated because she was a young girl trying to do something good for the country."

Estella Alvarenga, a mother of three, said Guillen is a representation of the Latino community and a hard-working soldier who made a promise to our country.

"It breaks my heart," Alvarenga said. "I feel like trembling. I feel weak because I know it would hurt me if I lose my own kids."

Thousands also gathered over the weekend in a march, demanding justice for Guillen and her family.

"This case has really touched a lot of people for a variety of reasons," Espinoza said. "Not only was she a member of the Latino community, but she was also a Houstonian and a member of the armed forces. So, this touches upon many communities, among many people who at the end of the day just want to see justice done for Vanessa because she didn't have to suffer the way she did, and her family shouldn't be going through any of this."

RELATED: Vanessa Guillen honored with march in Houston on Saturday