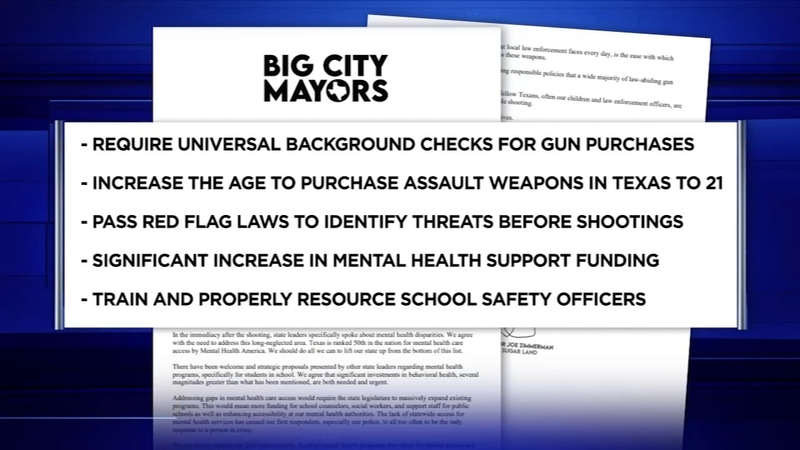 HOUSTON, Texas (KTRK) -- Thirteen mayors from across Texas signed a letter with five reform measures they want to see state leaders address immediately in the wake of the tragedy in Uvalde.

In the note, they call on Gov. Greg Abbott to call a special session.

In the letter, they outlined reforms they explicitly said: "would have prevented the shooters in El Paso and Uvalde from obtaining their weapons."

"It was just common sense for all of us," Mayor Zimmerman said. "You don't want to not do anything. In Sugar Land, one of the most important things we've had - administrations long before us - is (the title of the) safest city in America. Pretty hard to argue that you're really serious about being the safest city in America if you're not willing to address something like that."

"If Gov. Abbott can call three special sessions to make it harder for people to vote, surely he can call a special session to keep our kids from being massacred in their schools," Lina Hidalgo said.

"Addressing gaps in mental health care access would require the state legislature to massively expand existing programs," the letter states. "This would mean more funding for school counselors, social workers, and support staff for public schools, as well as enhancing accessibility at our mental health authorities. The lack of statewide access for mental health services has caused our first responders, especially our police, to all too often to be the only response to a person in crisis."

The mayors agreed that enacting gun policies that allow firearms to be obtained easier makes the jobs of law enforcement more challenging.

ABC News talks to experts who examine America's history with guns, the real-life impacts of gun violence and what can be done going forward to mitigate the problem.

Both Republicans and Democrats signed the letter urging the changes.

Mayor Zimmerman said they did not look at parties during their last meeting when they came up with the reform plan. Instead, he said they looked at what is best for their constituents and how to get there.

"My hope would be they would take a look at what we said, realize there's bipartisan support from across the state from local governments, and use it to more or less guide their hearings," Mayor Zimmerman said.

The letter was published on Monday, and Zimmerman said they have not heard from the governor.

ABC13 also reached out to Abbott's office but has not heard back.

Since the mass shooting in Uvalde, Mayor Zimmerman said the police chief of Sugar Land met with the police chiefs for both Lamar ISD and Fort Bend ISD, and officers have received additional training.

You can read the full letter below. If you have trouble seeing the document, you can access it here.


RELATED: 'We need to go in': Officers in Uvalde were ready with guns, shields, tools - but no clear orders
EMBED More News Videos

"They had the tools... But it takes someone in charge, in front, making and executing decisions, and that simply did not happen," an active shooter expert said.