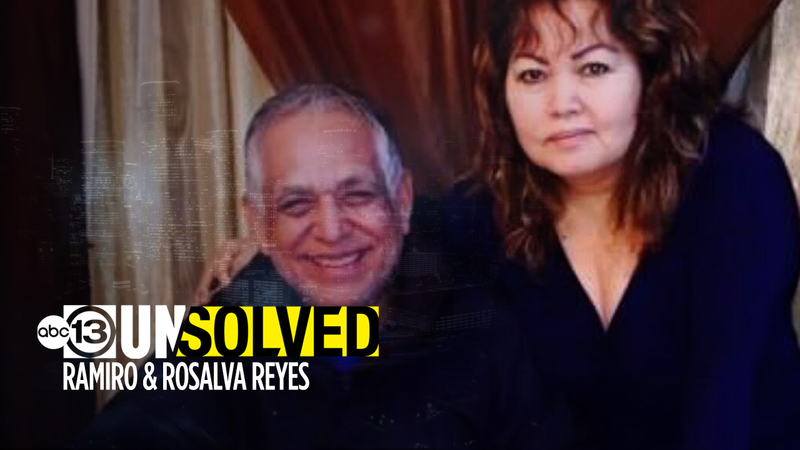 On September 25, 2019, as yellow crime scene tape went up around the mailbox, those happy memories faded and a new nightmare began.

CALLER: There is a lot of gunfire going on outside.

DISPATCHER: Okay, how many shots have you heard?

CALLER: How many shots have we heard? Probably 20, more than 20.

The caller's voice cracked and panic set in.

CALLER: Someone needs to get out here quick. Something's going on.

DISPATCHER: Okay, ma'am. We have several calls. Just stay calm. It'll be okay, alright? We'll get someone out there.

NEW #abc13 #Unsolved: The Reyes Murders. Not like my other cold cases. The Reyeses were murdered one year ago. Why’s the case cold? Because @HCSOTexas has run out of leads. They need your help, calling @CrimeStopHOU with tips. ⬇️ pic.twitter.com/193m03XNlF

As Ramiro and Rosalba lay dying on the street, flashing blue and red lights lit up the sleepy neighborhood. Detective Jack Ferrell with the Harris County Sheriff's Office was one of the first investigators there.

"When I arrived, it was a massive scene. You can see evidence markers all the way down the street," Ferrell said.

"The typical drive-by shooting is not like that," Ferrell explained.

In minutes, TV cameras showed up, and so did the couples cousins, friends, aunts and uncles.

"We never thought this would happen to a family member," the couples niece said.

Twenty-minutes before the sirens and before the police tape went up, Ramiro, 63, and Rosalba, 61, pulled up in front of their house. It had been a long night of mourning for the couple. They were drained, emotionally, mentally and physically.

Rosalba's mother had just died at the hospital. It was a painful goodbye. The Reyeses spent years taking care of her.

What happened next, they never saw coming.

Dozens of shots fired from another car. First, at Rosalba's niece's bright purple Dodge Charger. She was driving. Rosalba was sitting in the front passenger seat and her sister was in the back. Rosalba was the only woman hit.

As gunfire rang out, Ramiro was parking his green pick-up in front of the Charger. He rushed to his wife's side and was also shot.

Roxanna Villarreal, the couple's adult daughter, happened to be on the phone with her son, who has special needs. She was inside the house with his father, Roxanna's ex-husband. She was more than a thousand miles away in Colorado at the time, helpless.

"And I just heard a lot of people screaming, which was my cousin and my aunt that ran inside. I didn't know anything," Roxanna said.

Amid the chaos, Roxanna's ex-husband ran outside to see what was happening. As the couple laid dying in the street, their former son-in-law tried to help, but he too was shot.

By then, someone else called 911. Roxanna's ex-husband can be heard in the background screaming in pain. The screaming went on for 30 seconds before the line went dead. He was the only person who survived the shooting.

One year later, Roxanne returned to the pink brick house for the first time since her parents were murdered. The happy memories of her dad singing karaoke in the garage are now replaced with thoughts of him gasping for his breath on the black pavement.

For the past year, investigators have worked to answer that question. Ramiro and Rosalba had no criminal record, not so much as a speeding ticket. They focused on family and kept to themselves.

Ramiro immigrated to the U.S. from Mexico in 1979. Soon after, his new bride, Rosalba, joined him. The couple worked for a better life with new opportunities. One year later, Roxanna was born. Their daughter's education was their priority.

"My parents were very strict with me and because of that, I was able to complete three master's degrees and a bachelor's degree, coming from a very poor home. I owe them everything that I am," Roxanna said.

The Reyeses weren't wealthy, but Ramiro saved any extra money he did make for traveling. He worked to show his daughter the world. Together, they backpacked through Europe, rode camels in Morocco and hiked Machu Picchu. He opened Roxanna's eyes to new cultures and people.

"My dad was very outgoing. He liked to take chances, and my mother was more of a homebody, more conservative," Roxanna explained.

The grandparents had no enemies. It's why investigators can't figure out who would want them dead.

"Evidence that we have now suggests there was at least three shooters," Ferrell explained. "It appears that they (the shooters) drove by once, then they circled around, came back and shot again."

There are many details in this case investigators say they can't release, but they did share new surveillance video.

In the top left corner, you see vehicles and the shooters, but the headlights are too bright to make out the cars and suspects. It's the only video that captured the double murder.

"Eighty percent of what we do is normally drug related homicides," Ferrell explained. "But with these people it doesn't appear they were engaged in any kind of criminal activity. They were minding their own business when they were killed. That's what bothers me about this, you know. This could be my parents."

Ferrell believes the couple was targeted based on the rapid shooting. Audio of the shots were captured on a Ring doorbell camera.

"It's controlled fire. Somebody has discipline when they're firing. They're not just randomly firing," Ferrell explained.

There's a $5,000 Crime Stoppers reward for the couple's double murder. Roxanna said she has plans to increase the amount.

"I don't think anyone in their right state of mind did this. I don't know whether it was drugs, gangs, money issues or mistaken identity," Roxanna said.

Ramiro and Rosalba would have been married 41 years this October. Four decades of building their life was destroyed in seconds.

Roxanna feels the pain of their absence every day. Emptiness because they're gone, combined with aching grief because the killers haven't been caught.

She replays that day in her head again and again. Thinking about what could have been.

"I mean, why did (the shooters) have to come back? My dad could have been alive and he could have been there for my son and my daughter. Now, when my daughter graduates college, it'll probably be the saddest day. Neither of my parents will be there," Roxanna said

If you have any information about the Reyes murders, call Crime Stoppers at 713-222-TIPS.

Want more 13 Unsolved? Download the ABC13 news app or search ABC13 in your TV streaming device and search for 13 Unsolved.