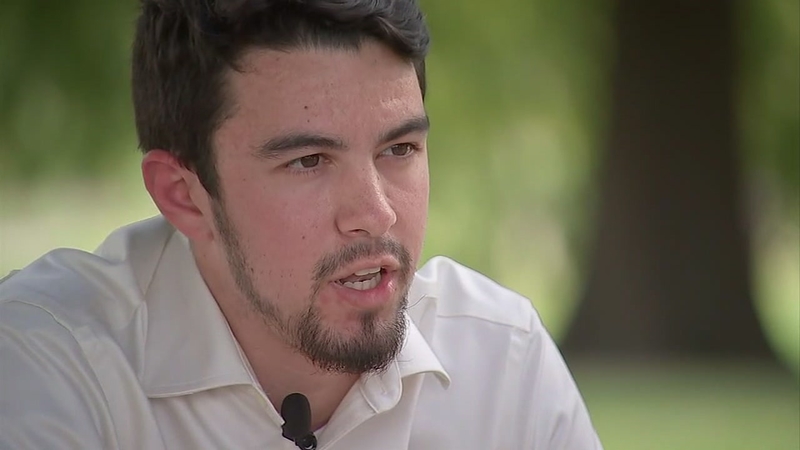 HOUSTON, Texas (KTRK) -- A former University of Houston student is speaking out for the first time after he said he was nearly killed during a fraternity hazing incident.

"I'm thankful that I'm alive," Munoz said. "I'm thankful I can look on this incident and provide some insight into it as a survivor."

A survivor to an incident laid out in Munoz's lawsuit filed Wednesday. In it, he describes three days when he rushed Pi Kappa Alpha at UH.

"As soon as we got into the vehicles to move out, you're blindfolded," Munoz recalled. "So you don't see where you're going at all. Your phone is put into a box before the event even begins."

Munoz said the first stop was a house filled with feces. In the lawsuit, it says, "The pledges were forced to roll around in the human waste and then ordered to clean the house while covered in waste."

Instead of food or drinks, Munoz said pledges were forced to drink heated beers that scalded their mouths. Finally, they played a glow stick game in which members tackled pledges running in the dark.

"I got blindside tackled from the left side," Munoz recalled. "I flipped in the air, 30 seconds on the ground, extreme pain, and that is what resulted in a lacerated spleen and internally bleeding for three days."

Despite it all, he remained with the fraternity for seven months.

"From inside, I thought that I could do better," Munoz said.

That changed, he said, when he researched his fraternity.

"You start to see these cases of people actually being killed and that just lit a fire in me that I need to tell my story," Munoz said.

In the lawsuit, there are 45 cases since the 1980s involving Pi Kappa Alpha, including death, rape and serious injury. We reached out to the fraternity, but we have not received a comment.

The fraternity faces a misdemeanor charge and is scheduled to be in court next week. The Harris County District Attorney's Office said it presented evidence to the grand jury, which only voted to indict the fraternity.

"To be perfectly honest, I was a little bit upset with that," Munoz said. "I felt that not going after them as individuals gives them a sense of getting away with it."

To hold them accountable, Munoz says he filed the million dollar lawsuit against Pi Kappa Alpha and 29 members. Munoz doesn't think Greek life should end, but he says hazing needs to be eliminated.

"Losing just one bright mind to a hazing incident where he just wants to be a part of a brotherhood is absolutely unacceptable. It's time to stand up," Munoz said.

It's time, Munoz said, for victims, including himself, to start telling their stories.