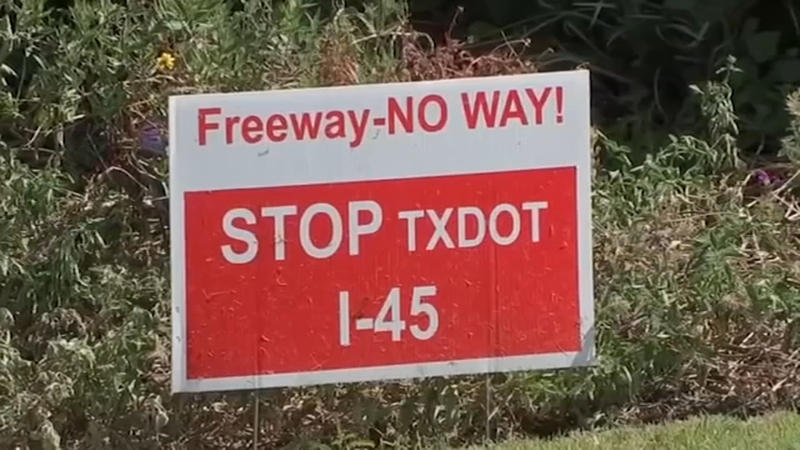 Homeowners continue the fight against the I-45 expansion

HOUSTON, Texas (KTRK) -- Those who are against the I-45 expansion thanked Harris County for suing TxDOT over the project, which could displace families and businesses, and cause health issues.

Travel through the 3100 block of Nance Street and it's not hard to figure out where Sean Jefferson lives. There's a "Stop TxDOT I-45" sign in his front yard, and half a dozen chickens happily running around.

"I think the chickens are pretty much acquainted with this area," said Jefferson, who has raised chickens and a duck or two in his home for five years.

But Jefferson and his flock may have to find a new roost if the Texas Department of Transportation's plan goes forward as planned. That's because the current plan calls for rerouting I-45 out of downtown, and around I-10, the highway his current home looks out upon. The entire row of houses, including Jefferson's, would be gone.

That's why he joined the grassroots organization Stop TXDOT I-45, where like-minded Houstonians tell anyone who would listen that they don't want to sacrifice the city's core so suburbanites could zip through town faster on their way to Dallas.

"There will be over 1,200 homes and over 300 businesses (lost,)" said Neal Erhardt, another member of the group. "That's a significant part of our economy. Building wider highways does not solve congestion, it makes congestion worse, as we saw on the Katy Freeway."

Experts have long pointed out that expansion of highways, at the expense of homes in a city's urban center, often displaces Black and brown communities. Now, it seems like the local advocacy group is finally getting a sympathetic ear.

About three weeks ago, Harris County Judge Lina Hidalgo announced the county was filing a lawsuit against TxDOT to get them to stop the project and listen to neighborhood concerns. At the federal level, the Federal Highway Administration also told TxDOT it must pause the project while officials study the project's impact on vulnerable communities.

On Tuesday, group members spoke at City Council, urging Mayor Sylvester Turner to join Harris County's lawsuit. But still, not everyone in communities that would be impacted by the expansion is convinced stopping it would be a good thing.

"I-45 as of now, it's an argument. It's drawing attention away from things we really need and things that are really happening," said Margie Paige, the president of the Independent Heights Super Neighborhood Association.

Paige, who has lived in the area for decades, still doesn't have running water in her home more than a month after the deep freeze. Some of her neighbors are still waiting for [Hurricane] Harvey home repairs. While she understands Stop I-45's concerns, she likens the group to Johnny-come-lately, who were missing from the table when TxDOT first discussed the expansion a decade ago.

"I know TxDOT's doing something to help us," said Paige, who points out she does not know what the advocacy group will really do on the ground to help Independence Heights. "We might be affected, I don't think we'll be greatly affected, because we've been at the table."

For now, the entire project remains in limbo. TxDOT has not shown signs of willingness to budge on it, as Jefferson and others in the community vow to fight any expansion.

"Love this place," said Jefferson, "It's going to displace my whole family."