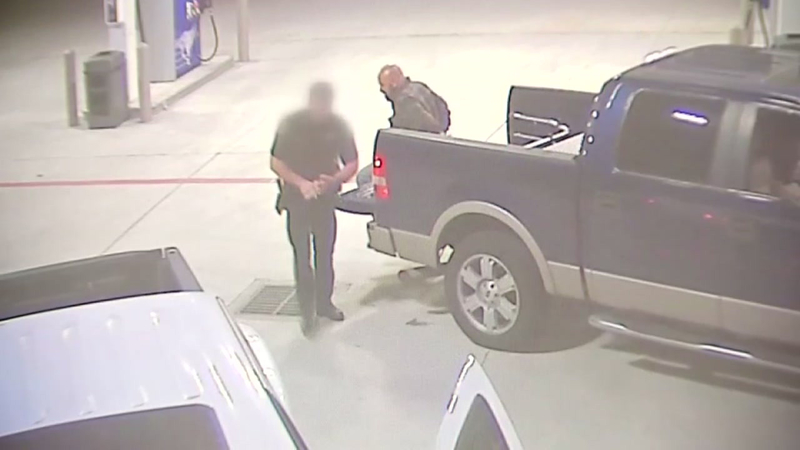 HOUSTON (KTRK) -- A northwest Harris County man is charged with aggravated assault for an April Fools' night confrontation with an off-duty Houston police officer. Surveillance cameras caught the whole thing from several different angles. He and his attorney believe that'll prove he's innocent. But the Houston Police Officers Union says not so fast.

Julian Carmona tells us he was rushing into the parking lot of the Exxon gas station in the 11300 block of Barker Cypress to use the restroom when he came within feet of another truck that was backing out of a parking space.
When he got out, something dropped.

"When I turned around, I see it's my gun. Because I had it in the side of my door. That's where I kept it all day," Carmona says.

And he tells us he put it back in his truck when it fell out.

The man in the other truck was an off-duty Houston police officer. He got out, pointed his gun at Carmona, and ordered him to the ground. The officer cuffed him and called in Harris County deputies to arrest him.

According to the incident report he filed with Harris County Sheriff's Office, the officer told the deputies Carmona pointed a gun at him twice.

"I know what I did. There's nothing, especially when I have my kids that I'd do to put them in any kind of danger," Carmona explains.

His attorney, Jed Silverman, went back to the gas station and got the surveillance video.

"The video shows exactly what happened, which is my client never pointed a firearm at anybody," Silverman says.
EMBED More News Videos

"My No. 1 concern is that the Harris County District Attorney's Office dismiss this case immediately."

The DA's Office won't confirm or deny that they're looking into this, but multiple sources tell us they are.

Houston Police Officers Union President Ray Hunt says the video is not as clear cut as you might think.

"I do know that at some point between the steering wheel and the door jamb of the car, there is an object in his right hand that he appears to bring from the console over the top of the steering wheel," Hunt says. "Where that gun is pointed, I don't know."

Hunt says this may have been a big mix-up.