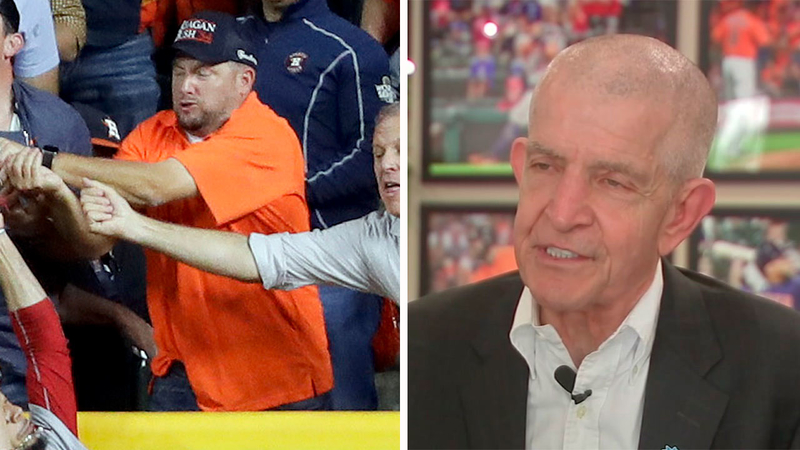 HOUSTON, Texas (KTRK) -- Houstonians are rallying around the fan at the center of Game 4's interference call.

Troy Caldwell has been getting hateful messages on social media. His family is even concerned about his safety.

He flew home to Atlanta after Wednesday night's game, but he's back in the stands for Game 5 at no cost to him.

"I'll think to the day I go to the grave that it was a home run but that's the way it works," said "Mattress Mack" Jim McIngvale, the owner of Gallery Furniture.

He wasn't sitting far from Caldwell.

"He's a fan out there, cheering for the Astros. The ball came and it was a split second decision," said McIngvale.

He doesn't blame Caldwell for reaching for the ball. Neither does talk radio host Michael Berry.

"This is a dad, this is a coach - he coaches his kids - this is a husband, this is a fan. Let's leave it there - let's have perspective - it's just a baseball game," said Berry.

He shared those sentiments in a tweet announcing that he and Mattress Mack would fly Caldwell back from Atlanta and buy him seats for Game 5.
"I don't think that people are necessarily mean today," said Berry. "I think that social media gives people an outlet to say things that they later regret."

Mattress Mack and Berry wanted Caldwell to have a positive experience at Minute Maid Park.

"As Texans, Houstonians, we put our arms around everybody," said McIngvale. "We did during Hurricane Harvey and I think Troy is a good guy. (He) didn't mean any harm to the Astros."

Mattress Mack says it wasn't a good call, but Caldwell shouldn't be blamed.

"Hopefully, we'll win tonight, win the next two and it will all be forgotten," said McIngvale.

FULL COVERAGE OF 'THE CALL'

A local umpire doesn't agree with the controversial call from Game 5 of the ALCS.

A Houston restaurant is coming to the defense of an Astros fan.