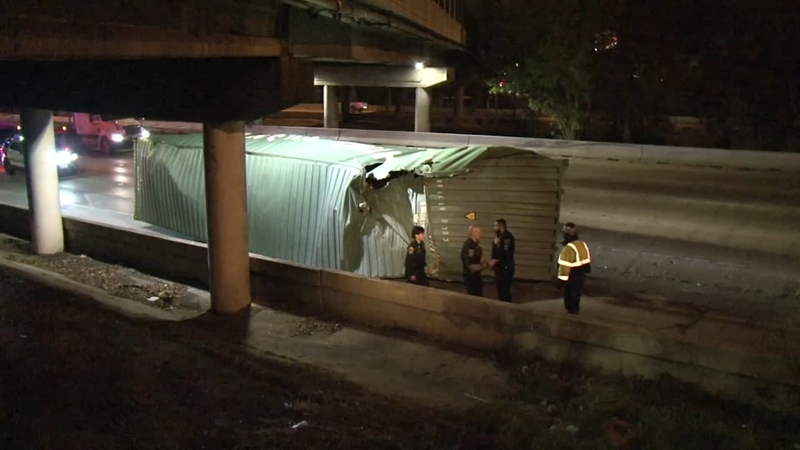 HOUSTON, Texas (KTRK) -- All traffic lanes of I-10 are back open after an 18-wheeler carrying a cargo container hit the Houston Avenue bridge.

Authorities were called out to the scene around 10:45 p.m. Wednesday at I-10 East right under the overpass.

According to crews at the scene, the cargo the 18-wheeler was carrying was apparently too high to go under the bridge. The container came off the 18-wheeler due to the impact, but no injuries were reported.

This is just one of several times the bridge has been hit. Last year, multiple trucks also slammed into the bridge, causing them to lose their load.

TxDOT does have future plans to increase the bridge height, but that's likely years away.

Truck slams into Houston Ave. bridge on I-10

It happened again: 18-wheeler hits Houston Avenue Bridge
Report a correction or typo
Related topics:
crash
Copyright © 2022 KTRK-TV. All Rights Reserved.
TOP STORIES
Daylight shows home destroyed after standoff with shooting suspect
What we know about man accused of shooting 3 HPD officers
Suspect arrested after 30-minute chase ends on I-45 in Texas City
Clouds clearing today, sunny through the weekend with rain next week
5 people charged in connection with Pct. 5 corporal's murder
How many times can I reuse my N95 mask?
Decades after TV anchor disappears, convicted rapist denies connection
Show More
Driver dies after slamming into 18-wheeler's trailer on US-59
Woman shot in the shoulder during robbery set up in SW Houston
Prepare for a major closure at I-69 and 610 West Loop this weekend
Officers escort body of corporal killed in ambush to funeral home
ABC13 obtains HPD scanner traffic of chase that led to shootout
More TOP STORIES News