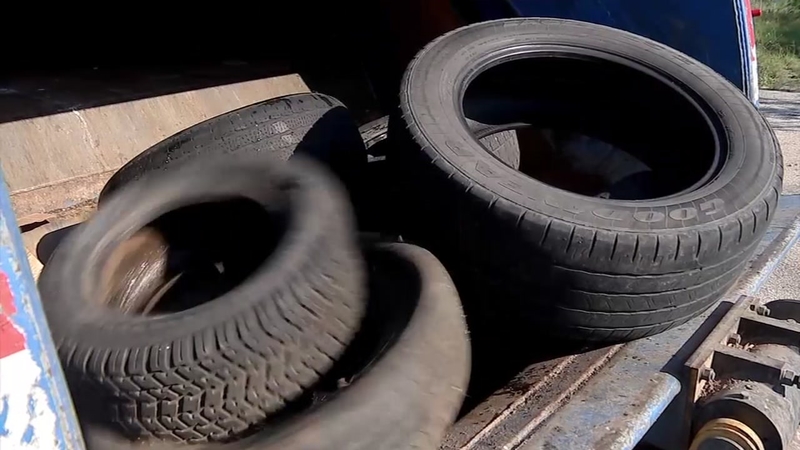 HOUSTON (KTRK) -- The tires are taking over and Houstonians are tired of it.

Texans create one scrap tire per person each year, according to city officials. In the Houston area, that comes to 6.5 million scrap tires annually.

If you drive through stretches of Harris County -- particularly in poorer neighborhoods and rural swatches -- you'll see mounds of discarded tires illegally dumped in ditches and thrown into vacant lots. Several piles of dumped tires in Houston can be seen from space.

"Tires? I see them all the time," said Lee Roy Henry, a resident of Burden Street in northeast Houston. "I'm tired of it. I don't like the looks of it. They'll throw dogs in there, too. It gets stinking so bad when the wind comes across there."

It's no secret to city officials, of course.

Houston City Council on Oct. 21 updated the city's solid waste ordinance aimed at tightening rules and increasing staff to fight companies that illegally dump thousands of tires throughout the city. Under the new rules, companies that transport tires in Houston will be required to pay $172 annually to the city for permits, plus $43 for each additional truck.

Violators? They could be charged with a misdemeanor and face fines of up to $2,000.

And under current rules, those who dump large quantities of tires -- more than 15 or 20 -- might face a felony charge and two to 10 years in prison.

But even with the threat of felonies and the city's new rules, Ted Oberg Investigates found how huge the illegal tire dumping problem is in the city and how easy it is to dump scrap tires and skirt the law.

The city's Solid Waste Department told abc13 they clean up around 12,000 tire dump sites each year, which adds up to about 70,000 tires -- just a fraction of what's been dumped.

The amount of arrests made for illegal tire dumpers is shockingly low. Just two to three a year, officials said.
"Dumping of solid waste, which includes tires, is a big problem in this state," said Stephen Dicker, senior police officer with the HPD's Environmental Investigations Unit. "We do conduct surveillance activity through the city and sometimes we get lucky, but more times than not we don't."

His unit gets between 200 and 300 complaints of solid waste dumping each month, including tire dumping. And while they bring many cases to court, a mere sliver of those brought to justice are tire dumpers.

"It's difficult if there are no witnesses to the activity," Dicker said. "A lot of the dump sites are slightly traveled, and there are no residences around. After hours there are no businesses open. Those are the places that any dumper looks for.

"It's just all around difficult."

On the front line of cleaning up the tires is the city's Solid Waste Department and the department's Alyce Coffey, manager of community outreach and information.

She has picked up so many tires for the city, her fellow employees dubbed her "the Tire Lady."

"My friends tease me," she quipped. "They say I can smell a junk tire."

Ted Oberg Investigates recently spent the day with Coffey and a Solid Waste crew picking up tires in northeast Houston.

The Houston Solid Waste Department takes its trucks and follows a route based on tire dump complaints. They team saddles up to tackle tires every other month.

How many tires picked up each time?

"It varies a lot," Coffey said. She noted that her team collects and recycles between 120 to 1,000 tires on each of their rounds gathering up illegal tires.

On this particular trip they will pick up "400 to 500 in this one section of the city," she said.

Will it make a dent?

"I'd like to think so, but when we come back every two months there's more," Coffey said.

Coffey said she's tired of picking up tires, but is proud of the work the city's solid waste crews do.

"It's environmentally important, particularly in a place where we have a lot of rain and a lot of mosquitos and the breeding might cause disease," she said. "It's important health-wise."

At the core of the problem, Coffey said, are fly-by-night tire shops and dumping companies that don't want to pay the money to properly recycle tires..

In addition, the city will pick up to four tires from the curbs of residents on junk waste day. And the city of Houston will accept up to 10 tires at any Houston neighborhood depositories. Just bring proof of Houston residency.

But there are plenty who want to avoid the recycling price tag.

"You have tire shops who don't do it the same way," she said. "And you have people who pick up junk for a living and they dump the trash and the tires and then they end up on the street."

"It's perpetual. It just won't go away," she said. "I don't get angry. I just figure out how I can educate better."

The HPD's Dicker agrees. Fixing the problem will come when people take ownership of their neighborhood and see the police as a partner.

"When there is a dumping activity, people are driving by constantly," Dicker said. "Everybody has a cell phone nowadays and cell phones all have cameras. Snap a shot. We don't want you to confront anybody, but take a picture. You get us a license plate, tell us where the activity occurred, we can track it back and make a case."