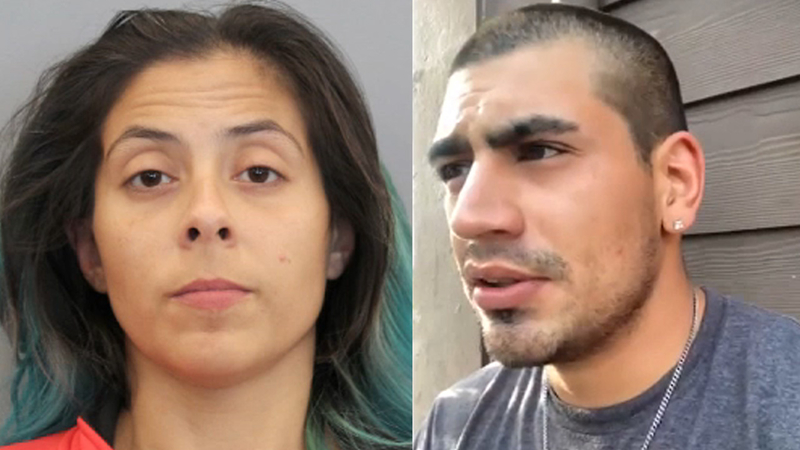 HOUSTON, Texas (KTRK) -- It had been weeks since Alex Rizo communicated with his ex-girlfriend Theresa Balboa and so he was not receptive when she recently contacted him.

"She just called me out of nowhere and said, 'Is the offer to come up there still open?' I told her, 'No,' and that was it, and she stopped replying," he said.

According to Rizo, Balboa made contact with him on either May 23 or 24, which would have been, a witness told police, after 5-year-old Samuel Olson was already dead.

Balboa, 29, is charged with tampering with evidence, namely a corpse, in connection to the little boy's death.

The only person charged so far in Samuel Olson's disappearance and death returned to Harris County as dawn broke Friday.

"From what I've heard on the case, she had already done what she did and she had that little boy, where she had him, and was trying to use me to run away from it," Rizo told ABC13 on Friday.

There was a time when Rizo knew Balboa the best. They were together for more than 10 years. She is the mother of his two children. He said they broke up four years ago and claims it was far from amicable.

He moved to North Dakota and then Oklahoma for work. Two months ago, he reached out to see if she needed help. He said she did not respond.

"It's weird. It's confusing, as the mother of my children," said Rizo. "I know she's had problems. She's had her issues. I know she's had a difficult life. I would have never have thought something of this magnitude would ever happen."

Balboa arrived in Harris County the day after disturbing new details revealed the boy may have died weeks ago on May 10.

In 2019, Balboa lost custody of their children. Court records show she did not show up to court. The girls are now being raised by their grandmother, Rizo's mother. They are 8 and 6 years old. Olson was a few weeks shy of his 6th birthday.

After Rizo denied Balboa's request to visit in May, court records show she turned to a male friend in San Jacinto County who helped her get to Jasper with the boy's body. Investigators believe she was trying to get to Louisiana. Instead she remains in jail, linked to Olson's death.

"If she's convicted of killing that child I hope she gets the worse thing that could possibly happen to her as a child. The Theresa I knew, at one time, was a good person. Whatever she is now, that's not the Theresa I was in love in with," Rizo said. "I don't know what happened, what flipped in her mind."