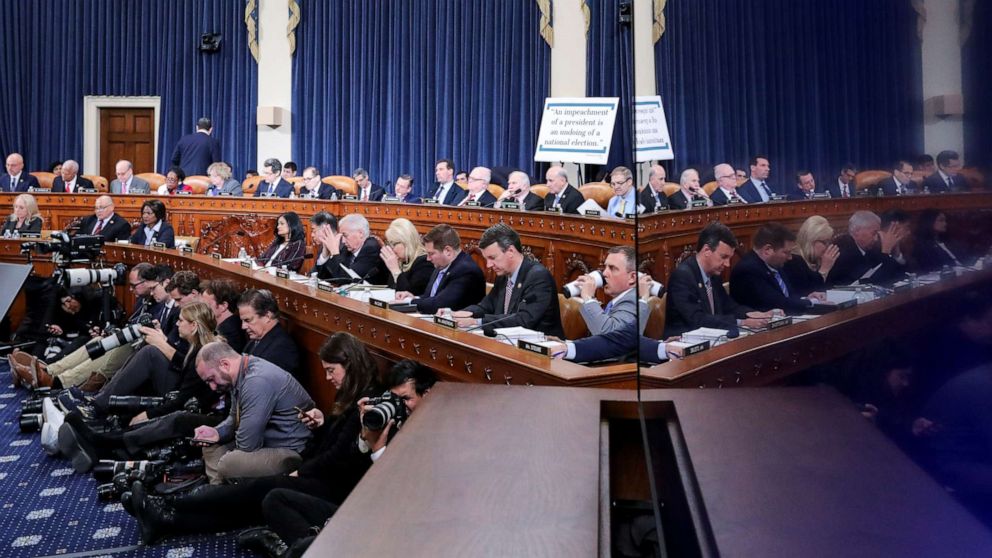 ABCNews
By RICK KLEIN
The TAKE with Rick Klein

If President Donald Trump's actions constitute a "clear and present danger," as the House Intelligence Committee report asserts, House Democrats are pursuing a timeline that reflects that urgency.

That may be one reason for the speed that's defining Democrats' push for impeachment, with all signs continuing to point to a pre-Christmas vote on the House floor. But other reasons for quick action are coming into view -- with broader lessons for this moment in politics.

Among the most effective argument deployed by the GOP's impeachment expert, professor Jonathan Turley, was his counsel for Democrats to slow down.

"If you rush this impeachment, you are going to leave half the country behind," Turley warned.

Yet Democratic leaders don't want to chase ghosts when it comes to potential testimony from administration officials who may not have much to add anyway. They also don't want to clutter their arguments with any number of other potential items, from ground covered by Robert Mueller to issues raised by the emoluments clause.

Perhaps most relevantly, while House Democrats are largely convinced that they are on the right side of history, they are increasingly coming to the opinion that the public is unlikely to join them there in sufficient numbers any time soon.

"Opinion on impeachment seems to have hardened as a result of the public testimony instead of persuading people to change their position," FiveThirtyEight's analysis of recent polling finds.

To build on Turley's argument, this means that if half the country is being left behind, Democrats' working theory is that they want to stay there. That serves as its own warning as we enter a presidential-election year where the candidates would rather be talking about other things anyway.

The RUNDOWN with MaryAlice Parks

The legal scholars testifying on Wednesday were tasked with putting the allegations against Trump into historical context -- around the framing and intention of the Constitution as well as in direct comparison to the past impeachment proceedings of other presidents.

President Richard Nixon was mentioned by name more than four dozen times over the course of the day.

At the start of his opening remarks, Judiciary Chairman Jerry Nadler accused this White House of unprecedented obstruction.

"No other president has vowed to, 'fight all of the subpoenas,' as President Trump promised," he said. "In the 1974 impeachment proceedings, President Nixon produced dozens of recordings. In 1998, President Clinton physically gave his blood."

The past articles of impeachment laid against Nixon included allegations of obstruction of justice as Nixon, like Trump, fought legislative subpoenas tooth and nail. For Democrats, the failure of the White House to participate in the process is a sign that he thinks he is above the law. The Republican witness, Turley, pointed out that there are three branches of government, not two and that Nixon lost in the courts, as Trump has of late.

One of the Democratic witnesses, University of North Carolina professor Michael Gerhardt, used a Nixon analogy to argue that the president could have still engaged in wrongdoing even though Ukraine eventually received the congressionally approved aid.

"The fact that President Nixon was not ultimately successful in covering up the break-in was not grounds for not impeaching him. The attempt itself is the impeachable act," he said.

Stanford Law School professor Pamela Karlan drew direct comparisons too saying, "Nixon abused domestic law enforcement to go after his political opponents. And what President Trump has done, based on the evidence that we have seen so far, is he has asked a foreign country to do that. Which means it's sort of like a daily double, if you will, of problems."

The TIP with Briana Stewart

Fourteen candidates filed to compete in the "First in the South" contest in South Carolina and, as anticipated, former New York City Mayor Mike Bloomberg will not be on ballot. He is running an unconventional national campaign, skipping the first four early voting states and focusing on battleground states where he'll have more time to make a case for his White House bid ahead of Super Tuesday.

Trav Robertson, chairman of the state's Democratic Party told ABC News that he understands Bloomberg's strategy, but called his decision not to file a "missed opportunity"-- not only for the Palmetto state, but for the billionaire's own campaign. Robertson said Bloomberg's state campaign could have expanded Democratic chances in purple counties, increasing the possibility to win over more moderate Obama-Trump Republicans and independent swing voters. More notably, South Carolina's primary also functions as a litmus test among minority voters and can propel successful candidates into Super Tuesday, where they compete in a cluster of states that feature a more diverse electorate.

"If you're going to make a play and make a stand, it's cheaper and more cost efficient to do it in South Carolina knowing that if you can't put together a message that communicates with people of color and a diverse electorate like we have in this state, then you're probably not going to be successful on Super Tuesday or in some of the larger states in America," Robertson told ABC News.

Sen. Kamala Harris' exit from the race has forced Democrats to have a frank conversation about the depleting diversity in the presidential campaign. Sen. Cory Booker told MSNBC that there are now "more billionaires than black people in the race," calling out Bloomberg and Tom Steyer who are outspending their rivals in political ads without matching their competitors' ground game. Meanwhile, Booker, former Housing and Urban Development Secretary Julian Castro, Rep. Tulsi Gabbard and Andrew Yang are all struggling to raise funds and meet the Democratic National Committee's qualifications to make the next presidential debate.

The impeachment inquiry moved to the House Judiciary Committee on Wednesday with a panel of constitutional scholars tackling the million dollar question in the debate: Do President Donald Trump's actions warrant impeachment under the Constitution? Here are the key takeaways from the hearing.

WHAT YOU NEED TO KNOW TODAY

Download the ABC News app and select "The Note" as an item of interest to receive the day's sharpest political analysis.