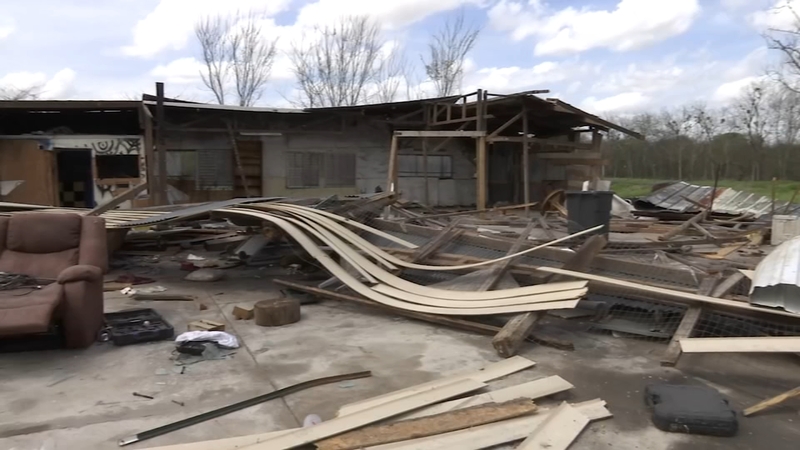 Mike White lives off of Crabb River Road in Fort Bend County. While the NWS did not declare a tornado hit his area, the damage to his property is substantial.

He had a 60 by 90-foot warehouse that he had offices in and bays to work on cars to earn money. Now, the warehouse no longer exists. Pieces of the metal building are scattered across the 17-acre property.

"It's like someone took an 18 wheeler and drove it through here," White said. "It crushed everything."

White said he and his wife were inside their home on the same property when they heard the storm start moving through.

SEE ALSO: 1 killed and over a dozen injured as tornadoes ripped through north Texas

"Underneath our carport, the door just whipped open and slammed," he said. "It blew the door open. We went and shut it, locked it, and went in the middle of the house and it was just a matter of a few minutes and everything was calm again."

White was in disbelief when he went outside and saw how much damage had been done. An insurance adjuster declared the property a total loss, and White does not anticipate the money they'll get will cover much.

"Less than five minutes worth of destruction is going to be months of clean up, and not only financial burden, labor-intensive," he said.

SEE ALSO: Radar-confirmed tornado touches down on northern Texas high school with staff and students inside

One of the hardest parts about the storm was losing track of their dog, Lucy. She was outside at the time of the storm and they have not seen her since.

Every time he picks up a piece of debris, White fears he will find the dog trapped.

"That's my biggest fear," White said. "All this stuff can be replaced. That dog that we had, Lucy, she was abandoned and abused. She was just starting to come around to where she would let people pet her."

He and his wife are hopeful someone will find the dog and return her.