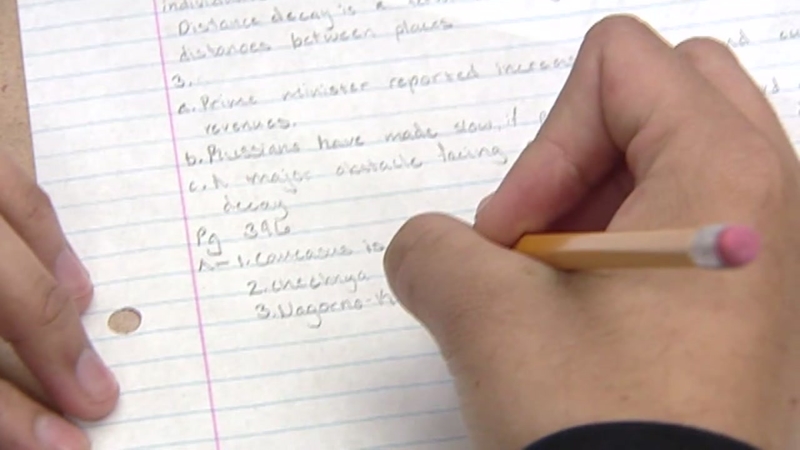 DEVERS, Texas (KTRK) -- The mayor of the city of Devers says he no longer wants the state's standardized STAAR test in his local school, and he plans on signing a proclamation Tuesday night banning the test in city limits.

Steve Horelica is not only the mayor, he teaches 5th grade at Devers ISD, where he says he has witnessed first-hand how ineffective the STAAR test is in educating his students.

"At the end of the year, the only thing that schools and TEA looks at is 'What was your STAAR score?'" Horelica said. "They don't look at how much children have grown, they don't look at 'Okay, this kid has a learning disability, so he is at a disadvantage.' They don't care. They just look at one thing. Did they pass or did they fail?"

Horelica said because the STAAR test has done very little to actually educate his students, he decided it was time to do something.

"And I just threw it out there as a joke and said, 'Boy, I wish I could make the STAAR test go away as mayor,'" Horelica said. "And some folks chimed in and said, 'Why don't you do it?'"

In a proclamation, he outlined several claims saying that the STAAR test was discriminatory against students with special needs. He also claims that the test is not graded by certified teachers, and is not grade-level appropriate.

"Legally, the mayor has no right to dictate what the schools do or what the state does. It's more about bringing attention to the fact that this needs to change," Horelica said.

He joins the other political leaders who are opposed to the STAAR test, including State Rep. Brooks Landgraf from Odessa, who has proposed legislation to eliminate the test entirely.

"I think it's too much pressure on children because I think so many of them get nervous," former teacher Edwina Land said. "I saw that in the classroom."

ABC13 Eyewitness News reached out to the Texas Education Agency for an interview, but were told they could not comment.

The mayor of Devers, Texas is about to make a controversial move regarding the STAAR test. Charly Edsitty reports.