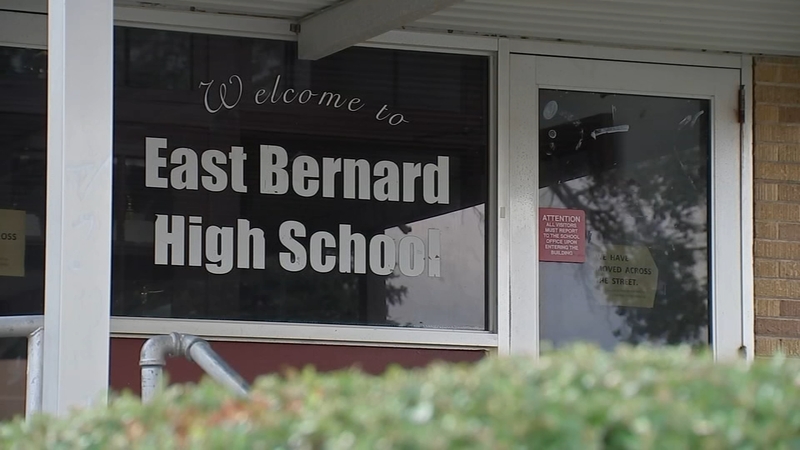 EAST BERNARD, Texas (KTRK) -- Black parents and students at East Bernard High School are calling for disciplinary action to be taken against a group of white students who took part in racial comments posted in a text thread.

The social media group chat with white students has Black students at the school fearing for their lives.

"I mean, I couldn't believe it. My stomach dropped," said parent Tiffany Seydler.

Seydler's 16-year-old daughter, Tyra, got wind of the text thread after a friend showed it to her.

"I was at the lunch table and my friend showed me," Tyra recalled. "She was in the group chat and saw everything going on. It was supposed to be about prom, but it just ended up being racist."

ABC13 blurred the names of the students posting in the text thread, as well as the language used. Tyra said the group was discussing a party bus for their prom coming up on Feb. 5.

"I just feel uncomfortable being there now because that's a threat," said Tyra. "I just don't want to go to that school anymore."

The text thread was later shared with other Black students and parents across the district demanding something be done.

Tyra said she has not attended class in the last two days, fearing backlash from a student body where she said Blacks are outnumbered.

"She's supposed to go to school to learn. Not be afraid to go to school, because they're talking about hanging (expletive). You know that that's a huge threat!" Seydler said.

In the following statement on East Bernard ISD's website, Superintendent Courtney Hudgins said a social media group chat was created by students who are enrolled in East Bernard High School. She said this chat contained racist hate speech towards another student and the African American demographic.

On Monday, Dec. 6, 2021, a social media group chat was created by students who are enrolled in East Bernard High School. This chat contained racist hate speech towards another student and the African American demographic. The District was made aware of the group chat through shared screenshots late Monday evening. A full investigation of the social media chat and students involved in the chat began immediately the morning of Tuesday, December 7, 2021. The investigation continued throughout the day Wednesday, December 8, 2021. Security was provided on Tuesday as a
precautionary measure to ensure student safety and minimize disruption to the instructional day. Additionally, counseling services were, and continue to be, provided to students impacted by the incident. Students involved with the group chat and racist hate speech are receiving disciplinary measures in accordance with the student code of conduct. These measures are confidential. EBISD does not condone these students' actions or any other discriminatory remarks, threats, or behaviors, nor shall students or staff discriminate on the basis of race, color, religion, sex, age, nationality, or disability.

Going forward, parents, students, and staff must partner together to rebuild unity and equity. East Bernard ISD strives to provide a safe, inclusive environment for all students to learn, achieve, and build lifelong relationships.

ABC13 reached out to the school district but has not heard back.

The district went on to say that students involved with the group chat and racist hate speech are receiving disciplinary measures in accordance with the student code of conduct, but the measures are confidential.