Gov. Abbott easing inspections at 2 international bridges after days of backlog at border 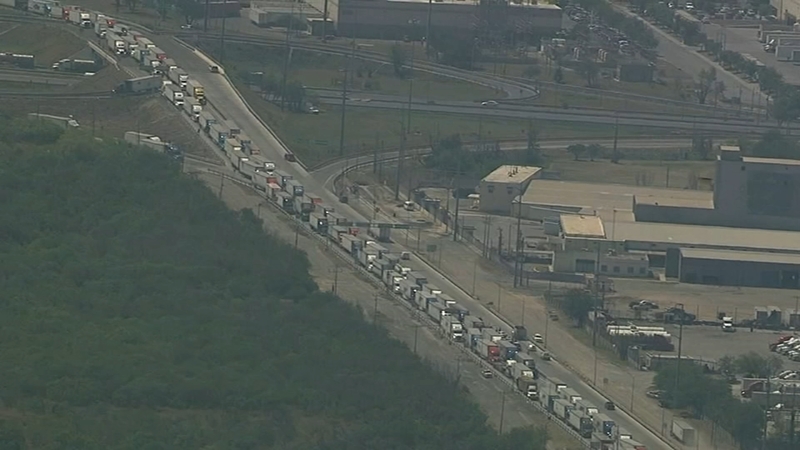 Gov. Abbott eases inspections at 2 international bridges at the border

EL PASO, Texas (KTRK) -- Texas has struck a deal with another Mexican state to ease the backlog at the border that was caused by strict and mandatory inspections of commercial vehicles heading into the U.S.

Gov. Greg Abbott , who for days has allowed commercial trucks to backup for miles into Mexico after requiring them to stop for additional inspections in Texas, lifted that order for bridges in El Paso and other cities after announcing a new security agreement with the neighboring Mexican states of Chihuahua and Coahulia.

Many truck drivers grew frustrated after waiting at least a full day to get their trucks inspected at the crossing.

The rollbacks come as Abbott has faced intensifying pressure over the policy he rushed into place April 6 as part of an ongoing fight with the Biden administration over the flow of migrants and drugs. Inspection orders remain in other parts along Texas' 1,200-mile border, including the busy Rio Grande Valley, but Mexican trade leaders were optimistic those would also end soon.

A similar announcement was made Wednesday after Abbott and the governor of the Mexican state of Nuevo Leon, Samuel García, came to a similar agreement. Abbott said he and García agreed to have Nuevo Leon's government increase border security measures on their side of the bridge. García hopes other governors in Mexican states will do the same.

The mandatory increased DPS inspections of all commercial vehicles were ordered by Governor Abbott. Those will now go back to being random checks performed by DPS at the bridge that connects Nuevo Leon to the U.S.

Abbott said he hopes to make similar agreements with other Mexican leaders in states and cities that have bridges directly connecting them to the U.S.

While inspections have been facilitated at two bridges, Gov. Greg Abbott says he'll be meeting with leaders of two other Mexican states in hopes of a similar agreement.

Bridges from two more Mexican states are still under the strict DPS inspections that have been causing delays. Abbott says he is hoping to meet with those leaders in the coming days.

In a statement, the U.S. Customs and Border Protection Department called the extra layer of inspections unnecessary. Nearly a week since the direction was ordered, we're now seeing lengthy delays at the border for commercial trucks. CBP confirmed some wait times at border crossings are exceeding five hours, and it's causing a 60% drop in commercial traffic.

"The longer than average wait times, and the subsequent supply chain disruptions, are unrelated to CBP screening activities and are due to additional and unnecessary inspections being conducted by the Texas Department of Public Safety at the order of the Governor of Texas," CBP said in a statement.

Local trade associations, officials, and businesses are calling on the Texas government to discontinue the additional border truck inspection process, according to CBP. It said extra inspections aren't necessary to protect the safety and security of the communities across our state. In fact, CBP said this is causing a bigger headache because of significant impacts to local supply chains and will ultimately impact consumers and businesses nationally.

On Wednesday, White House press secretary Jen Psaki said Abbott's unnecessary and redundant inspections of trucks transiting ports of entry are causing significant disruptions to the food and automobile supply chains. According to Psaki, it's delaying manufacturing, impacting jobs, and raising prices for families in Texas and across the country.

"Gov. Abbott's actions are impacting people's jobs, and the livelihoods of hardworking American families," said Psaki. "Local businesses and trade associations are calling on Gov. Abbott to reverse this decision because trucks are facing lengthy delays exceeding five hours at some border crossings, and commercial traffic has dropped by as much as 60%."

The inspections ordered by Abbott came in response to the Biden administration announcing last month it would wind down a public health law that has limited asylum-seekers in the name of preventing the spread of COVID-19. When that happens, the number of migrants coming to the U.S. is expected to increase.

"This is all designed to put a focus and spotlight on the border and to get Texans to think about President Biden's immigration policy, which is generally viewed in a negative manner by a majority of Texans," said Jones. "However, it's having the adverse consequences on potentially raising the costs of what Texans pay for tomatoes, strawberries, and avocados, as well as prices of manufactured goods if it continues beyond a few weeks."

Jones said the slow down for workers will mean shortages of goods at a time people across the nation are already struggling because of the record inflation at 8%.

"Everything that's happening at the border is only going to have a more adverse effect on inflation, causing higher prices not lower, and hitting Texans in their pocketbooks," said Jones.

He also said the president tends to get blamed for inflation, but this time it would be a case where the governor is causing prices to rise in Texas through political stunts at the border. Jones believes the security measures announced last week by Abbott have nothing to do with policy and instead, have everything to do with politics.

ABC3 reached out to Abbott on the matter to find out if there are other plans to address border security without impacting commercial trade, but we have yet to hear back.

The U.S.-Mexico border is crucial to the U.S. economy. The United States last year imported $390.7 billion worth of goods from Mexico, second only to China.

As the inspections taper off in Texas, Abbott says he will continue putting migrants on buses and sending them to Washington, D.C., calling it a message to President Joe Biden. "If he's not going to come to the border, we're going to take the border to him," Abbott said.

U.S. Customs and Border Protections Commissioner Chris Magnus said Thursday that Abbott was moving migrants without "adequately coordinating" with the federal government. The first bus arrived Wednesday, and Abbott said more are on the way.

The Associated Press Contributed to this report.