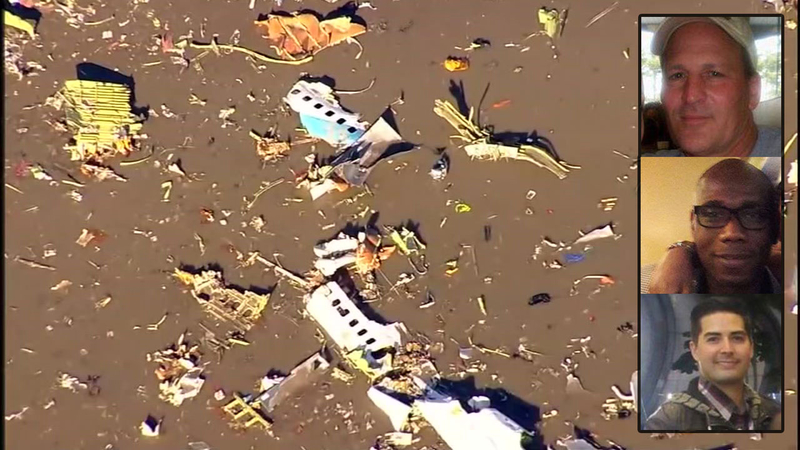 TRINITY BAY, Texas (KTRK) -- The names of three people who died in the Atlas Air flight 3591 crash in Chambers County Saturday have been released by law enforcement.

Chambers County Sheriff's Office said two bodies have been recovered, but none have been identified.

Archuleta was a pilot for Mesa Airlines who was sitting in a jump seat at the time of the crash. He leaves behind a wife, stepdaughter and a son who is less than a year old.

Aska is remembered as a "selfless bright soul" and family man who would do anything to help his only child succeed. Kayla Aska, his 18-year-old daughter, is a pre-med student seeking to become a pediatric neurologist at University of South Florida.

Work is underway to find the plane's black boxes, key to finding answers to what may have doomed the aircraft.

Good Samaritans who rescued people during Harvey were ready to save anybody, until they realized there was nothing left to save.

From the air, Skyeye reveals the startling images of what's left of the plane operated for Amazon. The cargo jet shattered into pieces after crashing Saturday afternoon.

Investigators said the aircraft was headed to Houston from Miami.

Crews returned to Fort Anahuac Park Monday morning, where they continued to efforts to recover the plane, along with the flight data recorder, black boxes and cockpit voice recorder.

"I rolled up and seen stuff everywhere," eyewitness Kade Till said. "You could tell there was going to be no one alive."

Till said he saw the debris first hand after racing out in a boat to look for survivors. He said those images will remain with him for a lifetime.

A preliminary report stated that the two-engine Boeing 767 cargo jetliner crashed shortly before 12:45 p.m. Saturday near the City of Anahuac, in the Trinity Bay.

"I hope to never seen again, hopefully," Till said.

Investigators said finding the black boxes may be tricky because they could be lodged in the mud.