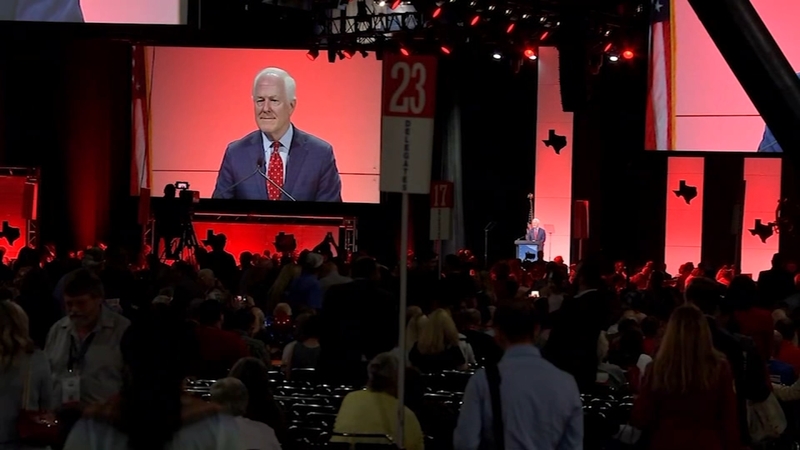 HOUSTON, Texas (KTRK) -- As the dust settles from the Texas GOP Convention hosted in Houston, the party's new platform continues to face criticism, even from some within the party.

Republican Sen. John Cornyn was booed at last week's Texas GOP Convention because of his efforts on bipartisan gun legislation.

Congressman Dan Crenshaw was also not warmly welcomed by his own party, as video shows a far-right protester calling him "Eye Patch McCain" at the convention.

"One way to describe it was conservatism unbridled," said Mark Jones, a professor of political science at Rice University.

The party adopted a new platform saying President Joe Biden was not legitimately elected and the party declared homosexuality as an "abnormal" lifestyle.

The Log Cabin Republicans of Houston, a group within the party that advocates for equal rights for LGBT+ Americans, released the following statement after the convention:

"The efforts of a vocal and organized minority saw inflammatory, hurtful and unnecessary language added to our Party's platform, the addition of which neither proclaims policy intentions nor helps build diverse coalitions; its only aim is to satisfy the zealotry of a few."

So, where does this leave the party?

King said he thinks the Republican and Democratic parties are both going toward the extremes, even though those values aren't shared by most Americans.

ABC13 asked Jones how he would describe the state of the Texas GOP right now.

"The Texas Republican Party is fractured in some sense in that you have a wing of the party that is very loyal to Donald Trump and responds to his leadership and you have a host of leaders who do not necessarily agree with that direction of the party. But when they look and see what a large portion of their base with that position, they don't feel that they can effectively contradict them or refute some of the things that are being said," Jones said.

Will the rhetoric within the party come back toward the middle?

Jones said he thinks it will, but not now while the outlook is good for Republicans.

"In boom times, like now, Texas republicans can veer to the right to their heart's content because they know that because of the problems the Biden administration is having, they're in good shape for November," said Jones.