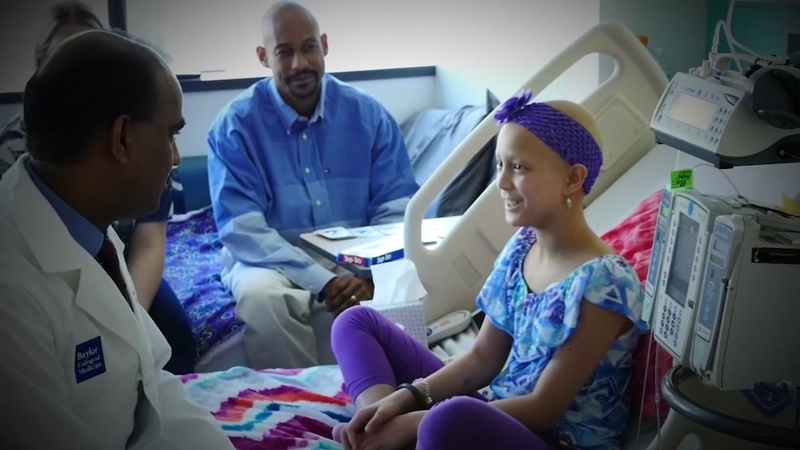 HOUSTON (KTRK) -- It's a nightmare for any parent, learning that your child has cancer. And when the diagnosis shows it's an extremely rare form of the disease, having a strong support system in place for the patient and family is critical. The Texas Children's Cancer and Hematology Centers provides just that.

Last year at this time, Eden Green was doing what she loves best.

"Dancing and singing, that's what I like to do" Eden told us.

But life had taken a sudden turn. It was a rollercoaster as she put it. It started last March when Eden developed an acute pain in one of her legs.

Her father, Wilford Green said, "We went to urgent care to get a couple X-rays on her. They told us to keep her off of it for a little while."

But her condition did not improve. After some time, Wilford and his wife finally learned what was happening with their daughter.

According to Dr. Rajkumar Venkatramani, "She wasn't diagnosed with cancer until three months later when she came to Texas Children's Hospital."

Dr. Venkatramani says a primitive neural tumor had developed in Eden's leg. The cancer was aggressive and quickly spread to other areas of her body.

"We were afraid, we didn't know what was going on," Eden's father said.

"Our definition for rare cancer is there is no standard treatment," Dr. Venkatramani said. "And not much is known about those cancers."

But the team at the Texas Children's Cancer Center was able to tailor specific therapy just for Eden, including a combination of chemotherapy which has not been given before to children like her, and also radiation treatment.

Depending on the chemotherapy cycle, Eden stays at the hospital for a few nights in a row.

"After this cycle of chemo, we have two more cycles left. And we should finish up the middle to end of February of this year," her father said.

The family says they're telling their story because they want to get the word out about this rare form of cancer, to hopefully help the next patient who's diagnosed with it.

Her father said, "She keeps us going. And for her, to see her smile makes us smile. And through this whole process, we've grown a lot closer together as a family."

As for Eden, she's optimistic about her future. She's looking forward to walking again and going back to Disney with her family.