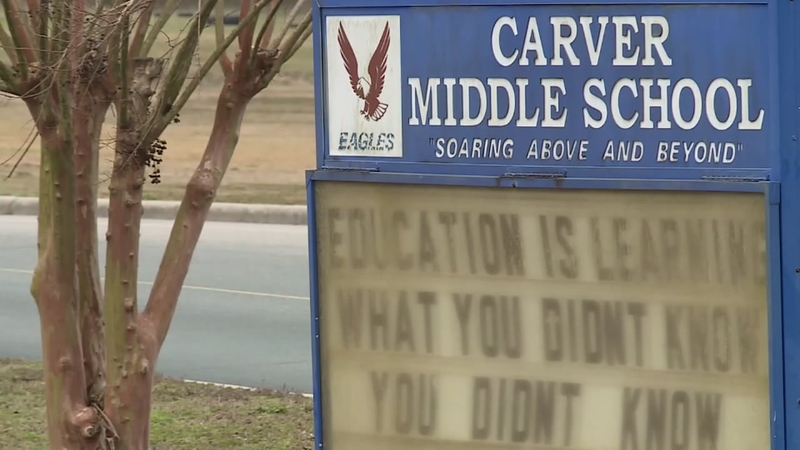 SCOTLAND COUNTY, North Carolina -- Law enforcement and school officials are investigating after six students, between the ages of 12 and 13, were planning a Columbine-style attack on their school, according to the Scotland County Sheriff's Office.

A statement from the sheriff's office Wednesday said two students told school staff that they believed the students would shoot people at the school Jan. 25.

Officials determined that the six students were discussing a Columbine-style attack in a manner that made investigators think they were serious, according to Capt. Jessica Sadovnikov.

A captain with the Scotland County Sheriff's Office on Tuesday night said the students face felony charges of communicating a threat of mass violence on school property.

Superintendent Ron Hargrave said he is proud of the students who spoke up and alerted the school.

"Because of that, because students were brave enough to come forward, our campus is safe," he said.

On Tuesday night, parents gathered at Carver Middle School, demanding answers from school leaders for nearly two hours. According to WRAL, they packed the library, their hands popping in the air, their questions tinged with anger.

While the principal, superintendent and school resource officer stood at the front of the room, one mother wiped away tears as parents demanded to know why the school didn't notify them sooner.

"Please put something in writing or in some type of policy where the school system is allowed to inform the parents before news media puts it out, because that's what really upset me," parent Sonya Thomas said.

Hargrave said the sheriff's office initially requested that the school system not make any public announcement.

"They didn't want students erasing stuff that they were going to have the opportunity to confiscate and see what they were talking about," he said.

"And we removed the threat as immediately as anybody possibly could," Sheronica Smith, the school's resource officer, said.

Authorities said the students have been removed. Sadovnikov said she is seeking to have all of the students put in a juvenile jail.

In Wednesday's statement, the sheriff's office said a student, who was not involved in planning the shooting, allegedly tried to physically assault the two students who first told school staff about the possible attack. That student will be charged with communicating threats upon students.
Report a correction or typo
Related topics:
north carolinaschool shootingcolumbine school shootingstudent arrestedu.s. & world
TOP STORIES
Who killed this 19-year-old woman in Dickinson?
Procession to be held today for fallen HPD senior officer
Gov. Abbott to sign anti-smuggling bill in Rio Grande Valley
Driver rescued from overturned big rig on North Loop at I-45
Front brings winds, cooler start to the day
Houston girl goes viral after accusing mom of being an alien
10-year-old boy hit by vehicle in Atascocita, deputies say
Show More
Biden to double US global donation of COVID-19 vaccine shots
Packers' star says chain with dad's ashes lost in endzone was found
Officials: Many Haitian migrants are being released in US
Housing director fired after alleging mayor is 'bankrolling' developer
Houston entrepreneur identified as man killed Westpark Tollway
More TOP STORIES News