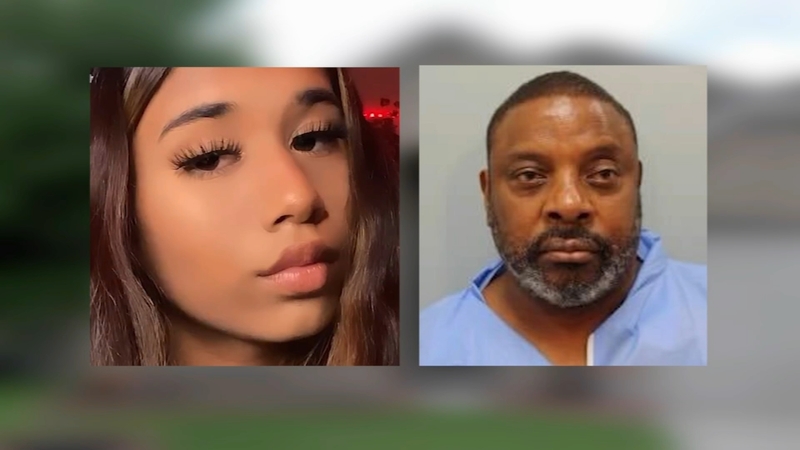 HUMBLE, Texas (KTRK) -- A 16-year-old was shot and killed inside her home early Friday morning in Humble, and her mother's boyfriend has been charged with her murder.

Van Henry Brisbon, 60, has been charged with murder. He has yet to appear in court, but his bond was set to $1 million.

The victim, identified as 16-year-old Lauren Juma, had her whole life in front of her. The teen had just made the Nimitz High School cheerleading team and had dreams of joining her older sister in the U.S. Air Force after graduation.

But now, her family is devastated. The tragic series of events began early Friday morning when Juma Facetimed with her mother and one of her older sisters.

"It was 1 o'clock in the morning, and she just said he was being really weird and she wanted me to come pick her up," said Keryca Harmon, Lauren's 19-year-old sister. "That's what I did."

But Harmon would never get to see her sister alive again.

"By the time I got there, the police were already out there searching around the house," Harmon said, tears welling up. "I was there about three minutes before I heard two gunshots go off, and I ran toward the house."

According to court records, Lauren told her mom, Laurie Young, in her Facetime call that Brisbon was standing inside her room in the dark and wanted her mother to tell him to get out, which she did. Lauren then screamed, "mom he has a gun," court records say. Then, the call was ended.

Meanwhile, Young, who was at a work training program in Austin, rushed back to the home she shared with Brisbon and her daughter for three years.

"She was 16. She just joined the cheerleading team," recalled the devastated mother. "She had a bright future ahead of her, and she was going to go to the U.S. Air Force when she graduated."

Family members who had met Brisbon over the past few years said outwardly that he seemed friendly and had no problems.

"He just seemed like a really good person when we met him," recalled cousin Antoinette Buckley. "Nobody thought this was going to happen."

Harmon told ABC13 that Brisbon had been "weird" before.

Investigators with the Harris County Sheriff's Office Homicide Unit have not released a possible motive.

"He can rot in jail," said Young, her voice breaking with emotion. "He had no reason for taking my baby's life. Sixteen years old."

Brisbon is scheduled to be back in court Monday.

"This morning, the district was notified of the death of one of our Nimitz High School students who passed away early Friday morning. We are deeply saddened to hear of her passing. Our community mourns her passing. Our thoughts and prayers are with her family, loved ones, and friends during this very difficult time. Counselors and the district's crisis team have been mobilized to respond to this tragic event and will be available to students and staff to assist them during this difficult time."
Report a correction or typo
Related topics:
humblemurderdeadly shootingfatal shootingteen killedteen shotshootingharris county sheriffs office
Copyright © 2022 KTRK-TV. All Rights Reserved.
TEEN KILLED
$25K reward offered to find 14-year-old's 'vicious killer'
14-year-old boy dies days after being shot in west Houston, police say
14-year-old boy dies days after being shot in west Houston, police say
Trial set in murder case of teen killed on way home from Astros game
TOP STORIES
Aggravated assault suspect shot and killed by Pasadena police
Chase suspect in stolen SUV crashes into innocent driver: Officials
HPD arrests man charged with robbing and kidnapping roommate
Celebrate National Streaming Day with Hulu for $1/month for 3 months
Here's how many inches of rain you could get over the next 7 days
1 killed when pick-up hits dump truck and catches fire
Teen shot in gunbattle between 2 groups in west Harris County
Show More
Line for sold-out concert stretched across Houston's north side
Is Texas missing out? Oklahoma cashes in on booming marijuana market
'Growing up Buttafuoco': Joey and Mary Jo's daughter tells her story
Woman claimed self-defense in deadly Clear Lake marina shooting
Harris County DA demands Hidalgo stop 'daily public misstatements'
More TOP STORIES News