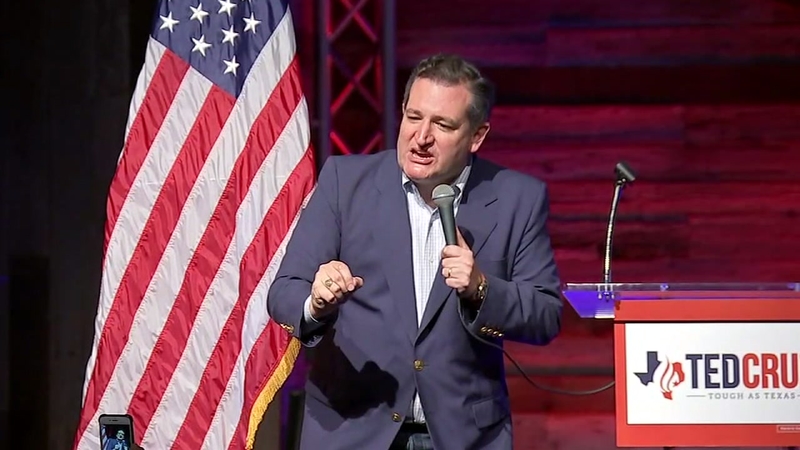 In front of a packed house of supporters in Stafford's Redneck Country Club, Senator Cruz said he represents Texans first and foremost. He told those in attendance, to loud cheers, that it is his number one job and he wants to keep doing it.

"Texas is independent," he said. "Texas is fearless. Texas is free."

He talked repeatedly during his stump speech Monday night about the spirit of Texans, honoring Jim McIngvale for his charity during Hurricane Harvey and Stephen Willeford, the man who helped stopped the Sutherland Springs church shooter. Both men received rousing ovations.

"We're here to energize folks for November that there's a real choice for the state of Texas," Cruz told Eyewitness News. "We were pleased to win the votes of 1.5 million Texans in the primaries."

Texas Senator Ted Cruz is kicking off his campaign with a three-day tour of the Lone Star State.

In the general election, Cruz faces a fight from Democrat and west Texas congressman Beto O'Rourke, who raised more funds than Cruz in 2017. O'Rourke has been running for the state's junior senate seat since March 31, 2017 and has multiple stops in the Houston area on Wednesday and Thursday this week.

Today, O'Rourke accused Cruz of not listening to his home state. O'Rourke trolled the Republican senator with a social media filter in Beaumont that suggested Cruz ignores his constituents.

Cruz is unapologetic in his politics. He's opposed to amnesty for undocumented immigrants. It doesn't win him favor with Dreamers or much of the electorate along the border, but he believes it's one of many issues on which most Texans agree with him.

The general election is a short seven months away. For Senator Ted Cruz, the effort to win began in earnest Monday night, in the midst of a 12-city, three-day tour of the state.