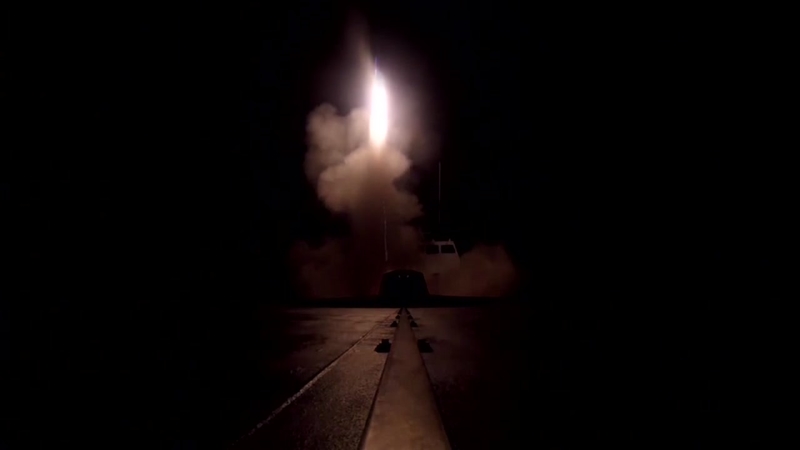 The United States, France and Britain launched military strikes in Syria to punish President Bashar Assad for an apparent chemical attack against civilians and to deter him from doing it again, U.S. officials said. Russian President Vladimir Putin denounced the raids as aggression that will make the humanitarian crisis in Syria worse and called for an emergency meeting of the United Nations' Security Council.

Putin added that the strike had a "destructive influence on the entire system of international relations."

Syrian television reported that Syria's air defenses, which are substantial, responded to the attack. Defense Secretary Jim Mattis said there were no reports of U.S. losses in what he described as a heavy but carefully limited assault.

President Donald Trump said the U.S. is prepared to sustain economic, diplomatic and military pressure on Assad until he ends what the president called a criminal pattern of killing his own people with internationally banned chemical weapons. The evil and the despicable attack left mothers and fathers, infants and children, thrashing in pain and gasping for air. These are not the actions of a man; they are crimes of a monster instead," Trump said.

On Saturday, Putin reaffirmed Russia's view that a purported chemical attack in the Syrian town of Douma that prompted the strike was a fake. Putin added that Russian military experts who inspected Douma found no trace of the attack. He criticized the U.S. and its allies for launching the strike without waiting for inspectors from the international chemical weapons watchdog to visit the area.

Mattis said the assault was a "one-time shot," so long as Assad does not repeat his use of chemical weapons. The strikes were carried out by manned aircraft and from ships that launched cruise missiles from the Mediterranean Sea. Mattis disclosed that the U.S. had not yet confirmed that the most recent suspected Syrian chemical weapons attack, on April 7 in the Damascus suburb of Douma, included the use of sarin gas. He said at least one chemical was used - chlorine, which also has legitimate industrial uses and had not previously triggered a U.S. military response.

He said the targets selected by U.S., British and French officials were meant to minimize civilian casualties.

"This is difficult to do in a situation like this," he said, in light of the volatility of chemical agents.

Defense officials from the countries involved in the attack gave different accounts of how much warning was given to the Russians, Syria's powerful ally.

Gen. Joseph Dunford, chairman of the Joint Chiefs of Staff, said the U.S. did not coordinate targets with or notify the Russian government of the strikes, beyond normal airspace "de-confliction" communications. But the description from an ally described things differently.

French Defense Minister Florence Parly said that "with our allies, we ensured that the Russians were warned ahead of time."

At a Pentagon news conference alongside Mattis, and with British and French military officers beside them to emphasize allied unity, Dunford said the attacks targeted mainly three targets in western Syria.

Dunford said missiles first struck a scientific research center in the Damascus area that he said was a center of Syrian research, development, production and testing of chemical and biological warfare technology. The second target was a chemical weapons storage facility west of Homs. He said this was believed to be the main site of Syrian sarin and precursor chemical production equipment.

British Prime Minister Theresa May said in London that the West had tried "every possible" diplomatic means to stop Assad from using chemical weapons. "But our efforts have been repeatedly thwarted" by Syria and Russia, she said.

"So there is no practicable alternative to the use of force to degrade and deter the use of chemical weapons by the Syrian regime," May said. "This is not about intervening in a civil war. It is not about regime change."

French President Emmanuel Macron said in a statement that a target of the strike was the Syrian government's "clandestine chemical arsenal."

The Syrian government has repeatedly denied any use of banned weapons.

The decision to strike, after days of deliberations, marked Trump's second order to attack Syria. He authorized a barrage of Tomahawk cruise missiles to hit a single Syrian airfield in April 2017 in retaliation for Assad's use of sarin gas against civilians.

Mattis estimated the latest air campaign was about twice the size of the 2017 strike. He added that the U.S. expects the Syrian government and its allies to conduct a "significant disinformation campaign," which the Pentagon would rebut with additional information Saturday morning.

The air campaign could frustrate those in Trump's base who oppose military intervention and are wary of open-ended conflicts.

Trump chastised Syria's two main allies, Russia and Iran, for their roles in supporting "murderous dictators," and noted that Russian President Vladimir Putin had guaranteed a 2013 international agreement for Assad to get rid of all of his chemical weapons. He called on Moscow to change course and join the West in seeking a more responsible regime in Damascus.

The Russian ambassador to the U.S., Anatoly Antonov, condemned the airstrikes and warned that "such actions will not be left without consequences."

The U.S. missile strike a year ago, which targeted the airfield from which Syrian aircraft had launched their gas attack, was meant to deter Assad from further use of chemical weapons. Since that did not work, a more intense attack would aim to degrade his ability to carry out further such attacks, and would try to do this by hitting Syrian aircraft, military depots and chemical facilities, among other things.

The strikes that hit early Saturday in Syria came hours before inspectors from the Organization for the Prohibition of Chemical Weapons were set to arrive to inspect the site of the apparent attack.

A broader question is whether the allied attacks are part of a revamped, coherent political strategy to end the war on terms that do not leave Assad in power.

The strikes appear to signal Trump's willingness to draw the United States more deeply into the Syrian conflict. Just weeks ago, Trump said he wanted to end U.S. involvement in Syria and bring American troops home to focus on the homeland. The participation of British and French forces enables Trump to assert a wider international commitment against the use of chemical weapons, but the multi-pronged attack carries the risk of Russian retaliation.

In his nationwide address, Trump stressed that he has no interest in a longtime fight with Syria.

"As other nations step up their contributions, we look forward to the day when we can bring our warriors home," Trump said. "And great warriors they are."

The U.S. has about 2,000 troops on the ground in Syria as advisers to a makeshift group of anti-Islamic State fighters known as the Syrian Democratic Forces. They are in eastern Syria, far from Damascus. A U.S.-led coalition has been conducting airstrikes in Syria since September 2014 as part of a largely successful effort to break the IS grip on both Syria and Iraq.
Report a correction or typo
Related topics:
politicsmissileu.s. & worldpresident donald trumpsyria
Copyright © 2022 KTRK-TV. All Rights Reserved.
TOP STORIES
Meet Keira D'Amato, the Chevron Houston Marathon 'mom'
Toddler hit by car while wandering alone in west Houston
FBI identifies hostage-taker at Texas synagogue
3 people shot when gunman opens fire outside private party
Chilly Sunday with a warmup through midweek
New 'beauty cam' on Rice campus upsets student streakers
Catch first full moon of 2022 Monday night
Show More
Expect more worrisome COVID variants after omicron, scientists say
Earth hits 6th warmest year on record in 2021
After Biden's first year, the virus and disunity rage on
What is Wordle - and how do you play?
School tries to address teen body image issues by offering shapewear
More TOP STORIES News